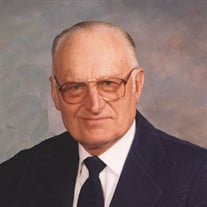 Robert C. “Bob” Hintz, age 88, of Menomonie, WI passed away Thursday, Sept. 19, 2019 at Mayo Clinic Health System – Red Cedar in Menomonie. He was born April 15, 1931 in Menomonie, WI to Edward and Ruth (Reinecke) Hintz and raised in the Town of Elk Mound, Dunn Co. WI. He attended Elk Mound School through the eighth grade, when he was needed to help on the farm. On May 31, 1952, Robert married Louetta Link at Peace Lutheran Church in Menomonie. Bob farmed on the home farm for a while, worked at Lakeside Aluminum in Menomonie and drove truck for Don Husby Trucking hauling brick for the Menomonie Brick Company. He was Custodial Maintenance Supervisor for the Menomonie School District for 32 years, until retiring in 1993. Bob had a small repair shop at his home, where he could fix almost anything. He was an official member of the Handy Man Club of America. He operated his own sawmill where he enjoyed cutting wood. He also enjoyed hunting, fishing and his tractors. Most importantly he enjoyed time spent with his family, boating and camping and visiting with anyone who stopped in. Bob is survived by his wife Lou; children, Sandie (Randy) Marlett and Dale (Kim) Hintz; grandchildren, Chris (Becki) Marlett, Melissa (Nick) Howard and Hope Hintz; great-grandchildren, Corbin, Maci, Aaron, Emmi and Calin; his sister Mary Slind; and special pet, his dog Kola; and other relatives and friends. He was preceded in death by his parents; and brother-in-law Loren Slind. The family would like to give a special thank you to the medical staff at Mayo Clinic Health System nurses and doctors for his exceptional care and compassion. Funeral Services will be held at 11:30 a.m. Tuesday, Sept. 24, 2019 at Olson Funeral Home in Menomonie, WI with Pastor Brad Peterson officiating. There will be visitation at the funeral home from 9:30 a.m. until the time of the service on Tuesday. Burial will be in Evergreen Cemetery in Menomonie. In lieu of flowers, the family asks that you give to a charity of your choice, in Bob’s name.

The family of Robert C. Hintz created this Life Tributes page to make it easy to share your memories.