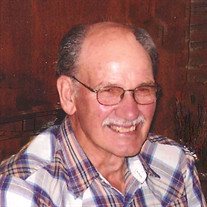 Robert G. Gayhart, age 88, of rural Wheeler, WI died Thursday, Jan. 5, 2017 at The Neighbors of Dunn County in Menomonie. The youngest of nine children, he was born Dec. 18, 1928 at Pleasant Prairie, Kenosha County, WI to Robert Lee and Dora Belle (Smith) Gayhart. Attending the Star School in their farm neighborhood, he finished eighth grade in the early 1940’s only to drop out to help on their family farms after his older brothers enlisted in the military. War intruded into Bob’s life again when at age 25, he was drafted. Trained as a combat photographer, the Korean Conflict was nearing its end and he never left the United States. During that period he attained his GED but it was too late to consider further education. Shortly after his discharge, he married Audrey Price. Two daughter, Sharon and Linda were born to this union. Together the farmed her family’s Century farm in Kenosha County. In 1958, he was selected as Kenosha County’s Outstanding Young Farmer. Needing more acreage and a location further away from the metropolitan area, they purchased a farm in Dunn County in 1967. Bob was a born dairyman loving his cattle and proud of their production and high quality milk. In 1997, after achieving his production goal, the dairy cattle were sold. A small beef herd remained on the farm. An avid deer hunter in his earlier years, in later life he enjoyed just sitting on a log, rifle across his lap, watching the birds and wildlife. Country life suited him. Bob was active in politics, Farm Bureau in Kenosha and Dunn Counties, a 4-H leader, choir member and held leadership roles in churches he attended. As a prayer warrior, Bob’s impact on eternity may never be fully realized this side of heaven. Bob is survived by his wife, Audrey; daughters, Sharon Coates and Linda Lamb; four grandchildren, Daniel (Echoe) Coates, Joy (Luke) Fell, Luke (Sarah) Coates and Jesse (Ashlee) Coates; ten great-grandchildren; numerous nieces and nephews as well as other relatives and friends. He was preceded in death by his parents, six brothers, two sisters, and a great-granddaughter. Funeral services will be held at 11:00 a.m. Monday, January 9, 2017 at Menomonie Alliance Church. Burial will be in Evergreen Cemetery in Menomonie. There will be visitation from 4:00-7:00 p.m. Sunday, January 8, 2017 at Olson Funeral Home in Menomonie and one hour prior to services at the church on Monday.

The family of Robert G Gayhart created this Life Tributes page to make it easy to share your memories.