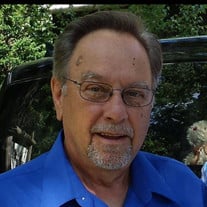 Robert Maurice Bodsberg, age 74, of Boyceville peacefully entered the kingdom of heaven on August 5, 2019. Surrounded by his family, Bobbie’s courageous battle with cancer came to an end. Bobbie was born on March 8, 1945 to Robert C. Bodsberg and Luella I. (Schultz) Bodsberg at the family farm in Knapp, Wisconsin. He graduated from Boyceville High School in 1963 where he met his wife, Sandie. The two wed on June 19, 1965 at St. John’s Lutheran Church in Boyceville, Wisconsin. After getting married, Bobbie and Sandie moved to the Twin Cities where they both worked for several years and started their family. Upon the arrival of their first son, Jeffrey, Bobbie and Sandie moved to Stacy, Minnesota where they welcomed their next son, Robbie. They lived in Stacy for two years before moving back home to Boyceville in 1971 where they settled and eventually welcomed their next two sons, Jamie and Rocky. Bobbie started working at Doboy/Bosch in New Richmond, Wisconsin in 1973 and spent the rest of his career there until retiring in May of 2013. While at Doboy/Bosch he worked as a machinist, quality control specialist, and CAD programmer. He also served for seven years as a member of the board of education for the Boyceville school district. Bobbie was a simple, soft-spoken man who enjoyed being outside, cutting wood, spending time at the cabins in Birchwood with family, watching birds flock to his backyard feeders, and listening to his favorite tunes. He was also known to be very skilled at fixing and repairing things. Some of Bobbie’s favorite memories came from watching his children and grandchildren participate in sports and other activities. Bobbie is survived by his sons Jeffrey (Trisha) Bodsberg of New Richmond, WI, Robbie (Shelly) Bodsberg of Clayton, WI, Jamie (Leslie) Bodsberg of Turtle Lake, WI, Rocky (Alison) Bodsberg of Waldo, WI, grandchildren Aaron, Michael, Robert, Riley, Rhea, Cansis, Krista (Kyle) Knops and Cameron, great grandchildren Piper and Style, sister Marilyn (Rondell) Hybben of Boyceville, WI, special friend Cathy Fuhrman, along with numerous nieces, nephews, cousins, other relatives and friends. He was preceded in death by his loving wife Sandie, his parents Robert and Luella, father-in-law Andrew Hybben and mother-in-law Kathryn Hybben. Funeral services will be held at 2:00 p.m. on Friday, August 9, 2019 at Trinity Lutheran Church in Boyceville with Pastor Brad Peterson officiating. Burial will take place at Tiffany Cemetery following the service. Visitation and lunch will also take place on Friday, August 9, from 12:00 p.m. until 2:00 p.m. at Trinity Lutheran Church. The family would like to thank the entire staff at the Mayo Clinic in Menomonie, especially Dr. Walker, for their continued compassion, care, and support. In lieu of flowers, the family encourages donations of blood to local blood banks in honor of Bobbie.

Robert Maurice Bodsberg, age 74, of Boyceville peacefully entered the kingdom of heaven on August 5, 2019. Surrounded by his family, Bobbie&#8217;s courageous battle with cancer came to an end. Bobbie was born on March 8, 1945 to Robert C. Bodsberg... View Obituary & Service Information

The family of Robert M Bodsberg created this Life Tributes page to make it easy to share your memories.