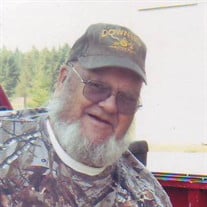 Robert “Bob” Claire Nusberger, age 77, of Wheeler, WI passed away Saturday, Oct. 4, 2014 at his home. Bob was born March 13, 1937 in Wheeler, WI to George and Annie (Stevens) Nusberger. In 1959 he joined the US Navy and was stationed in Norfolk, VA serving on the USS Sierra, and was honorably discharged in 1963. While in the Navy, Bob married the love of his life, Marlys Rasing on April 2, 1960. After his military service, he returned to Wisconsin and worked at Milwaukee Faucets for 15 years before returning to Wheeler where he worked for ConAgra until he retired in 1999. Bob loved farming, John Deere tractors and hunting for Deer. He also liked to watch Nascar, the Packers, shooting pool with the Old Timers and having jam sessions with his brothers and dad. Bob is survived by his loving wife of 54 years, Marlys; four children, twins Michele (Dan) Spiekerman of West Bend, WI and Michael (Wanda) Nusberger of Wheeler, WI, Lyn (Byron) Roland of Lino Lakes, MN and Carol Nusberger (Dale) of Bloomer, WI. He is also survived by 11 grandkids, Shane, Cara, Amy, Jeremy, Kimberly, Eric, Nicole, Jena, Brian, Karley and Karsten and eight great-grandkids. And further survived by a brother and sister-in-law, Douglas and Marilyn (Rasing) Nusberger; nephews, nieces, cousins and friends. He was preceded in death by his parents, brother Jerry, sister Georgia Culp, granddaughter Erin Lynn and in-laws Lloyd and Frances Rasing. A Memorial Service will be held at 11:00 a.m. Friday, Oct. 10, 2014 at Trinity Lutheran Church in Boyceville, WI with Pastor Brad Peterson officiating. Military Honors will be conducted by Harmon-Harris American Legion Post 314. There will be visitation at the church from 9:00 a.m. until the time of the service on Friday. Burial will be in Our Savior’s Lutheran Cemetery in the Town of Hay River, Dunn Co. WI at a later date. Olson Funeral Home in Menomonie is serving the family.

The family of Robert “Bob” C. Nusberger created this Life Tributes page to make it easy to share your memories.