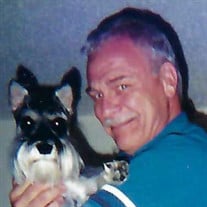 Robert (Bob) Stanley Arnold, age 76, of Ridgeland Wisconsin passed away Wednesday, January 26, 2022 at Marshfield Medical Center in Marshfield Wisconsin. Bob was born April 24, 1945 in Mayville, ND to Alvin Lewis and Dolly Capatola (Ellestad) Arnold. He grew up in Portland, ND and graduated from Portland High School in 1963. Bob enlisted in the Navy and upon his return he attended UND in Grand Forks, ND where he graduated with a degree in Business Administration. He married Jo Ann Werner May 14, 1993 in Bismarck ND. They lived in Bismarck where Bob worked for the State of ND as a payroll auditor until 2010 at which time he retired. In 2013 Bob & Jo Ann moved to Ridgeland, WI where he spent the happiest years of his life living in the woods amongst all God's creatures especially the deer. Bob enjoyed gardening, splitting wood, reading God's word and spending time on short trips with Roger and Candy Amick. Bob is survived by his wife JoAnn of Ridgeland, two daughters Angela Salvatore and Denise Arnold; two brothers Alvin and Gerhard Arnold; three sisters Delores Langseth, Donna Trosen(Paul) and Diana Petroske. He is also survived by several grandchildren, many nieces, nephews and other relatives and friends He was preceded in death by his parents Alvin Lewis, Dolly Capatole, one brother Ronald and his best dog friend, a miniature schnauzer Sadie. A Memorial Service will be held at 2:00 p.m. Sunday, April 17, 2022 at Frederic Seventh Day Adventist Church (605 Benson Rd., Frederic, WI 54837) with Pastor John Redlich officiating. There will be a meal following the service. Olson Funeral Home in Menomonie assisted the family.

The family of Robert S. Arnold created this Life Tributes page to make it easy to share your memories.