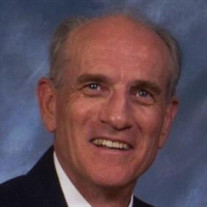 Richard Howard Rust, 76, of Menomonie, WI, passed away Monday, January 24, 2022 at St. Mary’s Hospital in Rochester, MN. Richard died from complications of a stroke resulting from a deteriorating heart valve replacement. Richard was born September 14, 1945 in Cumberland, WI to Harold A. and Ethel A. (Kraimer) Rust and was baptized into the Christian faith on October 7, 1945 at St. Paul’s Lutheran Church in Cumberland. He was raised on a farm in rural Cumberland with 5 siblings, and graduated from Cumberland High School in 1963. After graduation, Richard worked with his brothers in California for several months before enlisting in the US Army in February of 1964. He was stationed at Ray Barracks in Friedberg, Germany (where Elvis Presley had been stationed a few years earlier) and served as a Hawk Pulse Radar Repairman. Before being stationed in Germany, he was united in marriage to his high school classmate, Diane (Hagen) Rust on June 12,1965. After receiving an Honorable Discharge, Richard attended Control Data Institute in Minneapolis. Following his graduation, Richard was hired by Mohawk Data Sciences as a Computer Engineer in Des Moines, IA until 1969. The family, now including two boys, then moved to La Crosse, WI where Richard attended UW-La Crosse, graduating in 1974 with Highest Honors, earning a Bachelor of Science degree. During his college years he worked many part-time jobs, including carpet & fire damage cleaning, Pepsi delivery to outlying Coulee region towns, and driving truck for a moving company. He was also active in their church and sang in the church choir. By now the family had grown to three boys. Following graduation, Richard was hired by the Menomonie School District as a Physical Education Instructor. During his time with the School District, Richard also coached Boys Basketball and Track, and officiated & coached Girl’s Volleyball. In 1983, Richard utilized his electronic and teaching skills as an computer maintenance Instructor in the Contract Defense Training Division at Sperry Corporation, later Unisys Corp, in Eagan, MN. From there he trained military personnel in computer maintenance, traveling to various military bases in the US and throughout the world. He retired from Unisys in 2006. Throughout his life, Richard has been known and loved for his leadership ability, his love for people, and his love for his Savior, always reflecting the face of God to those around him. He used his gifts to serve his family, church, community, and country. He was always the first to step up and offer help when needed, just recently spending hours in the cold to help repair a broken garage door at the church, a week before his stroke. Over the years he has helped friends and family with countless projects including construction, remodeling, moving, and maintenance. He loved and supported his grandchildren, spending hours teaching them life skills and supporting them in their activities. He served in almost every capacity as a member of St. Paul’s Lutheran Church, including executive director twice, director of every board, maintenance coordinator, custodian, leading Bible studies, and was a faithful bass in the choir for 50 years. One of his favorite ways to serve was regularly visiting shut-in members unable to attend church in person. He had a special way of bringing happiness to their day as he brought them the Word of God. The church also brought together five families who, united by their faith, developed a very special bond as they camped and played together while their children grew. They have stayed close in the friendship they have enjoyed for nearly 50 years. Richard will be dearly missed. Richard served his community as Chairman of the Republican Party of Dunn County for seven years, and remained on the Executive Board to this day, working tirelessly for Christian Conservative causes. He was very proud to have served his country as a member of the armed forces. Over the years, Richard also found time to act and sing in two Menomonie Theater Guild productions, Brigadoon and Joseph and the Amazing Technicolor Dream Coat. Two projects he very much enjoyed. In “retirement” Richard & Diane renovated Diane’s family farmhouse in Cumberland. Together they have made it a welcoming place for gatherings of family and friends, and has become a very successful vacation destination enjoyed by many others who wish to spend time in a peaceful country setting. Richard is survived by his wife of 56 years, his sons Darren (Carol) Rust, Matthew (Sheryl) Rust, and Andrew (Maureen) Rust; and his siblings: Barbara Stauner, Beverly Stearns, and Bonnie Radcliffe, and sisters-in-law Sharon Rust, Patricia Rust, and Iris Lambert; his grandchildren Jonathan and Julia Rust, Daniel Rust, and Allison, Adam, Evan, and Drew Rust; along with many nieces and nephews. He was preceded in death by his parents; his brothers Roger and Rodney; his brothers-in-law Francis Stauner, Rex Stearns, Dennis Radcliffe, and Ray Lambert. Visitation will be held Thursday, January 27 at Olson Funeral Home in Menomonie, WI from 4:00p.m. to 7:00p.m. and a funeral will be held at 11:00a.m. on Friday, January 28 at St. Paul’s Evangelical Lutheran Church in Menomonie, WI, with visitation an hour before. The funeral service will be live streamed and available to view on St. Paul’s Menomonie Church facebook page. Following the service, military honors will be performed by the Menomonie Veterans Honor Guard. Interment will be at a later date in Lakeside Cemetery in Cumberland, WI. Memorials may be directed to St. Paul’s Lutheran Church in Menomonie. “Above all, love each other deeply . . . Each of you should use whatever gift you have received to serve others, as faithful stewards of God’s grace in its various forms. If anyone speaks, they should do so as one who speaks the very words of God. If anyone serves, they should do so with the strength God provides, so that in all things God may be praised through Jesus Christ. To him be the glory and the power for ever and ever. Amen.” 1 Peter 4:11

The family of Richard H. Rust created this Life Tributes page to make it easy to share your memories.