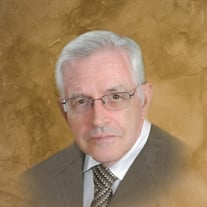 Richard John Oldfield, 87, longtime resident of Menomonie, Wisconsin, passed away peacefully at home on Friday, May 31, 2019. He was born on December 31, 1931 to Henry and Lilla (Freeborn) Oldfield in Minneapolis, Minnesota. He grew up in Minneapolis, near the University of Minnesota, where he participated in ROTC and received degrees in accounting and business. He also received his Juris Doctorate from the University of Minnesota. He served with the U.S. Army for four years after college. On September 14, 1968, he married Edna Mortenson. He attained his Certified Public Accountant licensure and purchased a small accounting practice in Menomonie in the mid-1960’s. His practice grew as he strove to provide each client with personal attention and excellent service. Richard invested his time and talents in his family, business, church, numerous community organizations, boards and children’s school activities. He was an avid gardener throughout his life and enjoyed Sunday afternoon walks or drives in West Central Wisconsin and Minnesota with his family. He enjoyed listening to classical music and watching Masterpiece Theater and English spy movies. He was a devoted husband of 50 years to his true love, Edna. Richard is survived by his wife, Edna; brother, F. Robert Oldfield; daughter, Ann Jones (Mark); daughter, Amy Middleton (Bart); son, Scott Oldfield (Megan); Todd Oldfield (Vicky); daughter, Tara Oldfield. In addition, he is survived by grandchildren: Amy and Neil Jones; Hollyn, Chance, Paige, Kaylie, Lauryn and Trace Middleton; Rainey, Lilla and Wesley Oldfield and Grace Oldfield. He was preceded in death by his parents, Henry and Lilla Oldfield. Funeral services will be held at 11:00 a.m. Wednesday, June 5, 2019 at Tainter United Methodist Church in the Town of Tainter, Dunn Co. WI with Pastor Craig Conklin officiating. There will be visitation from 4:00 to 7:00 p.m. Tuesday at Olson Funeral Home in Menomonie and at the church one hour prior to the service on Wednesday. Burial will be in Evergreen Cemetery in Menomonie, with military honors by the Menomonie Veterans Honor Guard.

Richard John Oldfield, 87, longtime resident of Menomonie, Wisconsin, passed away peacefully at home on Friday, May 31, 2019. He was born on December 31, 1931 to Henry and Lilla (Freeborn) Oldfield in Minneapolis, Minnesota. He grew up in... View Obituary & Service Information

The family of Richard J. Oldfield created this Life Tributes page to make it easy to share your memories.