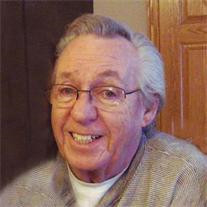 Richard Allen Meade lost his battle with dementia on November 10, 2013. Richard was born on August 1, 1933 in Springfield, MA to Harold and Margaret (DeNucci) Meade. After graduating from East Haven High School in Connecticut, Richard enlisted in the US Army in 1954 which he served for 2 years. He met and married the love of his life, Mary (Mazzacane) Meade, on August 31, 1957 and together they had 3 daughters. Richard was a drummer his entire life, playing in many bands throughout the years and teaching his skills to young musicians. Golfing was his second love, which he shared with many friends and family. He was thrilled to pass down his passion of the game to his daughters, son in law and grandson. After losing his wife in 2004 he moved to Menomonie and lived with his youngest daughter Kim and her family. Other interests include woodworking, music, sports, and tinkering in the garage. He is survived by a sister Patricia (Al) Poturnicki of Duxbury MA, brother Ralph (Angela) Meade of West Haven CT, Stepmother Josephine (Pellegrino) Meade of East Haven CT, daughter Margaret (Steve) Tilson of Torrington CT, Ellen Meade of Woodridge IL, and Kimberly (Jim) Gounaikis of Menomonie, WI. 6 grandchildren: Lisa (Mike) Hogan, Jeremie (Bonnie) Tilson, Ryan (Brandi) Herath, Jason Herath, Lexi Gounaikis and Zachary Gounaikis. He is preceded in death by his parents, Harold and Margaret,brother Harold, and his wife Mary. Visitation will be at Olson Funeral Home, Menomonie, Sunday November 17, 2013 at 11:00 am followed by a memorial service at 12:30, with Father Tom Krieg officiating. Military honors will be conducted by Menomonie Veterans Honor Guard. Our family would like to thank Comforts of Home, Menomonie and Azura Memory Care, Eau Claire for all of their loving care during the past 2 years.

The family of Richard A. Meade Obituary created this Life Tributes page to make it easy to share your memories.

Richard Allen Meade lost his battle with dementia on November...