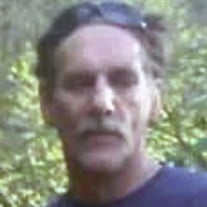 Richard J. Larrabee, age 53, of Menomonie, WI passed away unexpectedly on Thursday Nov. 13, 2014 at his home. Richard Jon Larrabee was born March 6, 1961 in Menomonie to Roy and Alice (Lawson) Larrabee. After high school, he served in the U.S. Army. Following his discharge from military service, Richard worked various jobs, most recently with American Phoenix in Eau Claire. Richard loved to make people laugh and was quite a jokester. He also had a passion for hunting, motorcycling and tinkering with most everything. He was a dog lover, but loved all of his many pets. Most importantly Richard loved spending time with his family and spoiling his grandchildren. Richard is survived by his parents, Roy and Alice Larrabee of Menomonie; a daughter, Mindy (Israel) Padilla of Farmington, MN; two grandchildren Isabel and Johny; his significant other, Sue Bignell of Menomonie; three brothers, Ronald (Char) Larrabee of Menomonie, Thomas (Sue) Larrabee of Menomonie, Marvin (Debbie) Larrabee of Elk Mound; a sister, Judie Miller of Iron River, WI. He was a father figure to Steven, Kayla and Tyler and known as Papa to Aneissa, Michael, Daniel, Camren, McKenzie and Reece. He is also survived by nieces, nephews, aunts, uncles, cousins and other relatives and friends. He was preceded in death by his paternal grandparents, Merle and Mable Larrabee and maternal grandparents, Carl and Hazel Lawson. Funeral services will be held at 11:00 a.m. Thursday, Nov. 20, 2014 at the Menomonie Alliance Church, with Pastor Steve Crites officiating. There will be visitation from 4:00 to 8:00 p.m. Wednesday at Olson Funeral Home in Menomonie and at the church one hour prior to the service on Thursday. Military Honors will be conducted by Menomonie Veterans Honor Guard.

Richard J. Larrabee, age 53, of Menomonie, WI passed away unexpectedly on Thursday Nov. 13, 2014 at his home. Richard Jon Larrabee was born March 6, 1961 in Menomonie to Roy and Alice (Lawson) Larrabee. After high school, he served in the... View Obituary & Service Information

The family of Richard J. Larrabee created this Life Tributes page to make it easy to share your memories.