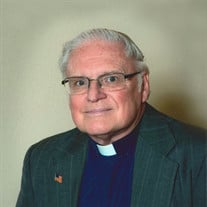 Richard Roy Klabunde concluded his earthly travels on Monday, August 27, 2018 at his home. Dick was born on October 15, 1938 in Oshkosh, WI, the first son of Lester and Violet (Pofahl) Klabunde. He graduated from Oshkosh High School, Wartburg College in Waverly, Iowa and Luther Seminary in St. Paul, MN. He was ordained as a Lutheran Pastor in June of 1964. On June 5, 1965 he married Sharon Dittbenner in Evan, MN. They had 2 children, Jillyn Rae and Daric Alan. He enjoyed traveling with his family, genealogy, and carpentry. For 40 years he worked on redoing an abandon farm house, which later became their retirement home. As a family they camped in their own van traveling 48 states, most of the provinces of Canada and more than 20 foreign countries. His last extended trip was last summer to Finland and Russia. He served parishes in Park Falls, Draper, Boyceville, Wheeler, Marinette, Birchwood, Long Lake, Downsville, Little Elk Creek, Ladysmith and Glen Flora, WI before retiring in 2004. For many years he served as an ecumenical officer for the National Church attending 3 Lutheran World Federation conferences in Strasbourg, France. He also served as a farm mediator for the State of Wisconsin. Dick is survived by his wife, Sharon, daughter, Jillyn (Rick) Geissler and their children, Alexander and Anna; son, Daric (Tammi) Klabunde and their children Brice and Briana; brothers, Steve (Donna), and Tom (Carol); sisters, Karen Thompson and Judy (Ron) Nelson. He is further survived by nieces, nephews, other relatives and many friends. He was preceded in death by his parents, a brother Charles and a sister Linda Shellnutt. Memorial Services will be held at 11:00 a.m. Saturday, September 1, 2018 at Christ Lutheran Church in Menomonie with Pastor Randy Skow-Anderson officiating. Burial will take place at Christ Lutheran/Halvorson Cemetery in Menomonie. There will be a visitation from 4:00 to 7:00 p.m. Friday at Olson Funeral Home in Menomonie and also one hour prior to the service at the church on Saturday. Dick was thankful to God for Sharon and for the many who have shown concern with their prayers, cards and visits. The family suggests memorials to Lutheran Partners in Global Missions.

The family of Richard R. Klabunde created this Life Tributes page to make it easy to share your memories.