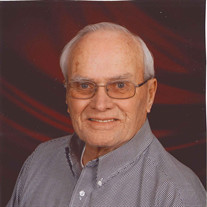 Richard A. “Dick” Hovland, 77, of Wheeler, WI passed away on Friday, March 17, 2017 at his home. Dick was born on October 26, 1939 in Antigo, WI. He and his younger brother Claire “Chuck” were adopted in 1945 by Chris and Minnie (Bergum) Hovland of Menomonie, WI. Dick graduated from Menomonie High School in 1958. He worked at Honeywell Corporation in ‘The Cities’ from 1959 to 1965. He married Diann Personius on April 14, 1962 at St Paul’s Lutheran Church in Jordan, MN. In 1965, they moved to the Bergum homestead in rural Wheeler, WI, with their two children. Dick graduated with a Bachelor’s degree from UW Stout, in Menomonie, WI in 1968 and in 1975 earned a Master’s degree in vocational education. He was a welding instructor for 30 years at District One Technical Institute (Chippewa Valley Technical College) and retired in 1998. Dick was a member of the Hay River Lutheran Church in Wheeler, WI, where he served on the church council and cemetery board. He took pride in mowing and maintaining the church cemetery for many years. Dick enjoyed snowmobile and stock car racing, deer hunting, and camping at Poskin Lake Resort with friends. He was a forever fan of Dale Earnhardt which was evident by all of the memorabilia in his summer kitchen. Dick is survived by his wife of 54 years, Diann, daughter, Joleen (Dan) Wiemann of Champlin, MN and son, Shaun Hovland of Menomonie, WI. Brothers, James (Ruth) Erdman, Robert (Natalie) Jacobson, Roger (Eileen) Jahnke, Sister, LuAnn Young, Sister-in-law, Idabelle Hovland, Half-Sisters, Rosemary (Iver) Knuth and Joan Warsinski. Grandchildren, Josh (Molly) Wiemann, Tyler (Katie) Wiemann, Alyssa (Justin) Smith, and Kyle Wiemann. Great-grandchildren, Madison, Jackson, Austin, and Carson Wiemann. Many nieces, nephews, and friends. He was preceded in death by his parents, Chris and Minnie Hovland, brother, Claire “Chuck” Hovland, sister, Dorothy Gensler and good friends Clarence Bryan and Jerry Hoy. Funeral Services will be held at 1:00 p.m. on Friday, March 24th, 2017 at Hay River Lutheran Church, in rural Wheeler, WI with Pastor Loren Barker officiating. There will be visitation at Olson Funeral Home from 4:00 to 7:00 p.m. on Thursday, March 23rd and at the church, one hour prior to the service on Friday. Burial will be at the church cemetery. Memorials to the Hay River Lutheran Church Cemetery or Window Funds preferred.

The family of Richard A Hovland created this Life Tributes page to make it easy to share your memories.