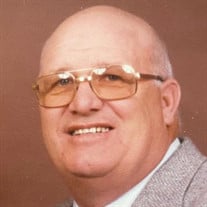 Richard James Halvorson, age 90, passed away peacefully Tuesday, November 23, 2021 at Glenhaven Nursing Home in Glenwood City. He was born August 7, 1931 to Axel and Viola (Johnson) Halvorson in New Haven Township in Northwestern Dunn County. Richard married Judith Marie Kopas on May 30, 1954. The following year they purchased their family’s home which was north of Connorsville and was affectionately know by them and the neighbors as “the hill”. They ran a small dairy farm there. In 1962 Richard and Judy quit farming and took the risk of starting their own business, Halvorson Electric. Richard was the electrical contractor and Judy did the bookkeeping. Richard and Judy, along with some great employees built a successful company. The company was run out of their house, then moved to Prairie Farm and finally a move to Ridgeland. Richard made some great friendships with his crew and customers. Richard retired from Halvorson Electric in 1991. After retirement they moved from “the hill” to Tainter Lake where they enjoyed life on the lake with family and friends. Richard and Judy enjoyed traveling around the USA and also to Norway. They spent their winters in Gulf Shores, AL. But perhaps the happiest times were spent on Red Cedar Lake at Birchwood where days were filled with friends, family, pontoon rides (or naps on the pontoon), fishing and campfires. Richard is survived by his daughter Linda (Steven) Slind, Kenneth (Brenda) Halvorson, Gary (Shirley Lundstrom) Halvorson, and Bruce Halvorson; five grandchildren, Amanda (Eric) Rydel, Andrew Slind, Brittany Halvorson, Tyler (Michela Peterson) Slind, and Jessica (Joe) Herberg; two great grandchildren, Owen and Gavin Rydel. He is further survived by his sister, Carol Broten, brother-in-law John (Rieta) Kopas, sisters-in-law Marjorie Kopas and Barbara Kopas; and many nieces and nephews. He was preceded in death by his wife, Judy, his parents, sister-in-law Dorothy Score and brothers-in-law Donald Broten, Raymond Score, Gerald Kopas and Leonard Kopas. Funeral services will be held at 2:00 PM on Monday, December 6th at Olson Funeral Home in Menomonie. The service will be followed by a visitation and celebration of Richard’s life from 3:00 to 6:00 PM at Olson Funeral Home. Private burial will take place at a later date.

The family of Richard J. Halvorson created this Life Tributes page to make it easy to share your memories.