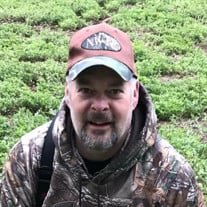 Richard James Ferguson Jr. was born 52 years ago on June 9, 1969, in Kailua, Hawaii. He passed away on July 7, 2021, in Eau Claire, WI. He was the son of Major Richard J. Ferguson (deceased 1988) and Judy Wildner Ferguson. A brother Jim (Katie) and their children, Paige, Walker and Paityn, and a sister Kelly (Scott) and her son Connor Higgins survive him. He was engaged to Sheryl Victoria, who provided comfort and assistance to him throughout the eight months that he lived with cancer. We appreciate all that she did. Her sons, Marcus and Larry were helpful. Also remembered is her daughter Victoria. We are also very grateful to Uncle Dave Ferguson for being with us and for all his help. Several Labrador Retrievers belonged to Rich throughout his life. Three yellow Labs, Roxie, Ryka and Royce are the most recent pets. Predeceased Roko was his favorite. Being in a military family, he lived in several states and has always been a source of strength in our family. Rich was employed by 3M in Wisconsin and Minnesota for 30 years, which included traveling stateside and overseas. He also had his own RJF Construction business for 30 years. He worked hard and always took pride in his work. He served as a Reserve Deputy in the Dunn County Sheriff’s Department in his younger years. Rich fished in Alaska, hunted Elk in Colorado, Caribou in Northwest Territories, and Turkey and Deer in Wisconsin. He especially enjoyed hunting on the land owned by friends in Pepin. An avid Pittsburg Steelers fan, he also enjoyed all types of John Deere memorabilia. Raised gardens were built and tended to by him, as well as taking care of his fruit trees and doing yard work. He is further survived by aunts and uncles, Jim and Sharon Wildner, sons, Jeff (Pam) and Jeremy (Stacey) and families; John and Rhonda Wildner, daughters, Dawn (Bill) Wickman and Tammy Wildner and families. On the paternal side, aunts and uncles, Betsy Hochstine (Bill, deceased), Jane (Dale) Johnson, Beth Hans and families, Dave Ferguson and his children, Benjamin and Ashley and families. Others in his life are Ruth Potter (Bob and son Steve both deceased), and Todd and Tiana Glenna with sons, Ethan, and Blake; Roechele, the Longsdorf family and Donna Thiess. He was preceded in death by grandparents, Tom and Grace Ferguson and Jim and Irene Wildner. Rich had hoped to live in Alaska someday after he retired. His ashes will be put to rest there. He wanted to live, and he did just that. There will be a celebration of his life at Wagner’s Lanes, 2159 Brackett Ave. Eau Claire, WI 54701 on Sunday, July 18, 2021, from 3:00 to 5:00 p.m. There will also be a life celebration at Dean & Sue’s Bar, 2002 Midway Rd., Menomonie, WI 54751 on Sunday, Aug. 1, 2021, from noon until 4:00 p.m. Olson Funeral Home in Menomonie, WI is serving the family.

The family of Richard J. Ferguson created this Life Tributes page to make it easy to share your memories.