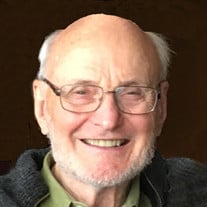 Clarke, Richard William “Dick” age 90, passed away October 11, 2020. Survived by his wife of 60 years, Jean Illsley Clarke, he was a beloved father to daughter Jennifer Clarke (Gary) and sons Marc & Wade (Amy) and granddaughters Katie, Addie, Disa, Freya and Gressa. Born May 10, 1930, Dick was a proud Eagle Scout and deeply grateful for his education at St. Paul Central High School (1948), where he made many lifelong friends. After earning a degree in Mechanical Engineering with High Distinction (1953) at the University of Minnesota under the NROTC program, Dick served as an engineering naval officer on the destroyer USS Yarnall for three tours in Korea. When he returned to Minnesota, it was the heyday of early computing, and Dick began his career as an engineer at Univac, followed by a decade at Control Data, and then 22 exhilarating years as a VP of international business development at MTS Systems. Dick loved big challenges, and he found or created many at MTS. He called it “Just good clean fun.” Dick was a strategic negotiator who could patiently outwait anyone during negotiations, and this proved the basis for his success in opening many international markets for MTS. He relished other’s successes and, as a loyal mentor, he took many under his wing, always challenging others to do their best. Deeply thankful for his engineering education and the life experiences it enabled, after he retired, Dick turned his considerable energy to volunteer work, serving in multiple capacities on the Minnesota High Tech Council and at the UMN College of Science and Engineering, where he was proud to be a key catalyst in developing funding for their new ME Building. Dick loved to travel and relished preparing for every new experience with extensive background reading. He enjoyed being outdoors, especially downhill skiing or deep-water sailing. He had many sailing adventures, avoiding icebergs in the Antarctic ocean or pirates shooting RPGs at them off the coast of east Africa. In 1993, Dick crewed on the Cloud Nine when it became the first fiberglass boat to cross the Antarctic Circle. Very excited about what he read about Antarctic wildlife, when he visited a colony of Adele Penguins, he was disappointed to find them not very appealing and very smelly. Dick led a complete life, with a wide range of interests, especially history and social issues. He only spoke of things that he felt passionate about - and there were many. There was no confusion on where he stood and at the same time, he respected all on the other side of his beliefs. He was a quiet and gifted conversationalist with a quick wit and dry delivery. He adored his grandchildren and delighted in being in their presence. When asked what was so special to him in his friendships, Dick replied that the most meaningful things were solid intellectual content and an honest exchange with meaningful ideas. He cherished his friendships. Special thanks to the doctors and nurses at Methodist who consistently ensured his comfort and dignity during the final week of his battle with dementia. Donations to donor's choice or to the UMN Department of Mechanical Engineering. If you have a message to share about Dick for his family and friends, please visit obituaries at www.olsonfuneral.com Stay healthy, stay safe. A post-pandemic celebration of Dick’s life will be held at the appropriate time. Meanwhile, in honor of Dick, read a good book, take a walk, engage a child, scratch a dog, gift anonymously, have a difficult conversation, consider alternatives, do the next right thing and keep in mind that eventually all things will work out.

The family of Richard W. Clarke created this Life Tributes page to make it easy to share your memories.