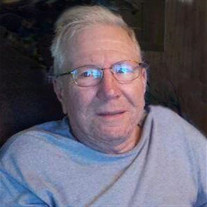 Richard P. Beguhn, age 84, of Colfax, WI passed away Monday, April 11, 2016 at Colfax Health and Rehabilitation Center. He was born April 27, 1931 in the Town of Elk Mound, Dunn Co. WI to Paul and Gwen (Mittelstadt) Beguhn. Richard attended Iron Creek Elementary School and graduated from Menomonie High School in 1949. On Sept. 20, 1958 Richard married Betty Kowalk in Colby, WI. In the late 1950’s they bought the Christian Beguhn homestead and farmed the family farm their entire life. Richard was a hard worker and devoted to family, to farm work, raising good crops, young stock, hogs and poultry. He was also a beekeeper and sold honey and enjoyed gardening. Richard had the ability to fix almost anything. He credits this ability to his shop classes at Menomonie High School. He also credits his parents for teaching him the values of life. He has passed these abilities and values on to his family. Richard has been living at the nursing home in Colfax and enjoyed reading, watching TV and his companion, lapdog Scooby. Richard is survived by Betty his wife of 57 years; his son Jeff (Audrey) Beguhn; his daughter Lisa Brown; grandchildren, Michael (Kallie) Beguhn, Adam (Anna) Beguhn, Jessica (Leun) Williams, Jennifer (Raul) Carrizales; great-grandchildren, Joseph Beguhn, Nykisha Trotter, Lili Higgins, Carlito and Ali Carrizales; sister-in-law, Joyce Beguhn; brother-in-law, Charles Bremmer; niece Michelle Schultz; as well as other relatives and friends. He was preceded in death by his parents, Paul and Gwen; his brother Ervin and sister Marlene Bremmer. Funeral services will be held at 11:00 a.m. Friday, April 15, 2016 at Our Savior’s Lutheran Church in Menomonie with Pastor Heather Wigdahl officiating. There will be visitation from 4:00 to 7:00 p.m. Thursday at Olson Funeral Home in Menomonie and at the church one hour prior to the service on Friday. Burial will be in St. Paul’s Lutheran Cemetery in the Town of Menomonie, Dunn Co. WI.

The family of Richard P. Beguhn created this Life Tributes page to make it easy to share your memories.