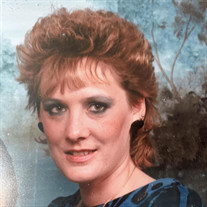 Rhonda Lynn Hellekson, 63 of Knapp, WI, passed away on January 10th at Mayo Clinic in Rochester, MN. She was very caring, outgoing, and very family oriented. She grew up loving animals, singing, dancing, competing in gymnastics, traveling the country, driving motorcycles, and shooting pool. She was even on the Oprah Winfrey Show in 1991. Rhonda was born in Menomonie, WI on June 30, 1957 to Don and Marilyn Borchert at Myrtle Werth Hospital. She grew up in Menomonie and attended Menomonie High School, before moving to Tennessee where she married her high school sweetheart, Tim Starkweather. While being stationed in Cherry Point, NC, she and Tim expected twins, but complications ensued and she miscarried; due to a surgical complication, she was unable to have kids naturally. Although her life goal was to be a mother and to have a family. She moved to the La Crosse area to be closer to family and separated from Tim. Then, while hanging around her twin brother’s local band, Short Circuit, she met John Hellekson and quickly fell in love with him. The couple married in 1986, moved to Menomonie and then bought their forever home in Knapp, WI. She became involved in the Methodist church in Knapp, especially in the youth group with her friend, Debra Nelson. Rhonda wanted to fulfill her life goal of being a mother and started looking into adoption, first finding an adoption agency India that was supposedly ran by a church, only to find out it was a scam. She was heartbroken, but she then found out about adoption in Peru and she and her husband, John, quickly got everything in order and flew to Peru. There, they adopted their first child, John Thomas, and in 1994, they adopted a girl, Alysha Marie, from Marshfield, WI. Her family was complete. She worked at Midwestern Precast in Menomonie for 25 years. She organized Peruvian reunion vacations which consisted of all of the families that adopted from Peru, during that time period, around 1990. The families would each pick a major city near each other and then they would all spend time and create memories together. She later transitioned to manager of loan stores in Menomonie and then finally got a job in a Super Max Prison in Oak Park Heights. Her family didn’t think she could finish the training, but she finished and passed with flying colors. Her health would dwindle soon after; bouts of neuropathy limited her mobility. But still she loved having family gatherings and watching her grandchildren grow. She is survived by her husband, John Hellekson, and her son, John Thomas Hellekson. Her grandchildren, Connor, Jaxon, and Evelyn (Nyblom), and Myles (Knowles). Brothers Ronald Borchert (fiancé Kathy), and Richard Borchert of Menomonie. She is preceded in death by daughter Alysha Hellekson, brother Ralph Borchert and her parents, Don and Marilyn (Wald) Borchert. A Memorial Service will be held at Trinity Lutheran Church in Boyceville at 12pm on Saturday, June 26th, 2021. Pastor JoAnne Wendt will be officiating. Family and friends are welcome at 11am for a visitation with the services to follow.

The family of Rhonda L. Hellekson created this Life Tributes page to make it easy to share your memories.

Rhonda Lynn Hellekson, 63 of Knapp, WI, passed away on January...