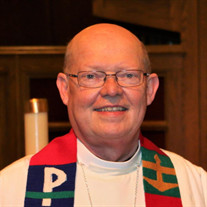 Rev. Curtis Herman Miller died peacefully at home surrounded by his family on September 15, 2020 in Eau Claire, WI. Curtis was born May 3, 1947 in LeMars, Iowa to Herman and Verna Miller. He was raised on the family farm and graduated from Remsen-Union High School in 1965. He attended Wartburg College, graduating in 1969. On June 2, 1969 he married Sharyl Vander Tuig of LeMars and they raised three sons, Eric, Nathan and Paul. Curt graduated from Wartburg Theological Seminary in 1973 with a Master of Divinity degree and he was ordained on July 1, 1973 at St. John’s Lutheran of LeMars. His first call was to Holy Trinity Lutheran of Dubuque, Iowa. From 1975 to 1982 he served St. Paul Lutheran at Tama, Iowa. In 1982 he became an Assistant to the Bishop of the Iowa District of the American Lutheran Church, and the family moved to Storm Lake, Iowa. In 1987 at age 40 Curt was elected the first Bishop of the Western Iowa Synod of the Evangelical Lutheran Church in America and he served 14 years. While he was Bishop, he served on numerous boards, including Waldorf College, Lutheran Social Services of Iowa and the Ecumenical Ministries of Iowa as well as the ELCA Church Council. Curt and Sharyl were able to travel around the United States, to Europe several times and to Tanzania, Africa to visit the Companion Synod of Western Iowa. After his service as Bishop, he served Christ Lutheran, Cottonwood, MN from 2001 to 2007. Curt and Sharyl retired due to his increasing health problems and moved to Eau Claire in order to be near family. Curt showed grace and courage in the face of increasing physical challenges. He loved his God, his family, Christ’s church and many friends. Survivors include: His wife Sharyl, his son Eric (Dawn) of Portland, OR, his son Nathan (Rev. Sarah) Miller of Eau Claire, and his son Rev. Paul (Marie) of Canyon Lake, TX; his wonderful grandchildren, Sebastian and Charlotte Miller, Soren, Lydia and Henry Miller, and Ruth and Jordan Miller; his sisters Linda (Dan) Chapman and Jan (Rod) Matz, his sister-in-law Jane Vander Tuig, and his brother-in-law Rev. Mark (Candice) Vander Tuig and numerous other relatives. He was preceded in death by his brother-in-law, Rev. Stephen Vander Tuig. Memorials may be directed to the Rev. Curtis and Sharyl Endowed Scholarship at Wartburg Theological Seminary, 333 Wartburg Place, Dubuque, IA 52003; Spirit Lutheran of Eau Claire or a charity of your choice. A private service for the family will be held on Saturday September 19, 2020 at 1:00 p.m. The service will be livestreamed through the Facebook page of Olson Funeral Home in Menomonie, WI or may be viewed at a later date.

Rev. Curtis Herman Miller died peacefully at home surrounded by his family on September 15, 2020 in Eau Claire, WI. Curtis was born May 3, 1947 in LeMars, Iowa to Herman and Verna Miller. He was raised on the family farm and graduated from... View Obituary & Service Information

The family of Rev. Curtis H. Miller created this Life Tributes page to make it easy to share your memories.