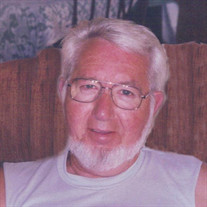 Raymond G. Metzger, son of George and Nellie (Tubbs) Metzger, was born on September 16, 1943 and flew away on wings of love Tuesday, October 7, 2014. He was 71 years of age. He was baptized and confirmed at Peace Lutheran Church and graduated from Menomonie High School. On May 25, 1965, he and Elaine C. Slocumb (Austreng) were united in marriage at Peace Lutheran Church in Menomonie, WI. They lived their entire married lives in the Downsville area between Menomonie and Durand and he also served in the National Guard. He worked for Century Fence, the Ford Garage and the Brick Yard. He also worked many years for Cirkl Sheet Metal and Cedar Falls Heating as a sheet metal fabricator. Ray enjoyed many outdoor activities including hunting, fishing, camping and four wheeling. He loved spending time with family, friends and especially his grandchildren who were his shining light. He drove a hard bargain and enjoyed putzing around the garage, tinkering on his latest project. Survivors include his wife Elaine, three daughters Lynn Thomazin and her husband Steve, Sherri Demetre and her husband Dean, and Vickie Slocumb; one son, Rory Slocumb; five grandchildren Tara and Trevor Thomazin, Jenny Bogseth and her husband Mike, Shannon Demetre and Justin Nelson; five sisters, Esther Beguhn, Georgia Beguhn and her husband Roland, Margaret Trafford, Eleanor Brehm, Jean Bechel and her husband Pat; two brothers Harold Metzger and Richard Metzger and his wife Leona; brother-in-law, El Austreng and his wife Pam; sister-in-law Ev Wang; along with many special nieces, nephews, and friends. He was preceded in death by his parents, sister Mabel Morse, brothers-in-law Frank Trafford and Gordon Beguhn, Alvin Morse, and grandson Michael Demetre. There will be a gathering of family and friends at Olson Funeral Home on Monday, October 13, 2014 from 4-8 p.m. Military Honors will be conducted by Menomonie Veterans Honor at 6:00 p.m. at the funeral home. In lieu of flowers, the family wishes donations be provided to your local church or preferred charitable organization in memory of Raymond G. Metzger. The family of Raymond G. Metzger wishes to express their sincere gratitude for the many kindnesses shown us in thoughts, words and kind deeds at this time of sorrow. A special thanks to Hospice and all the nurses and workers that touched our lives through Ray. Ray touched many hearts in his long lifetime and we, his wife, children and grandchildren have enjoyed your love and prayerful concern because of this legacy. We will never be the same. Fly Away!

Raymond G. Metzger, son of George and Nellie (Tubbs) Metzger, was born on September 16, 1943 and flew away on wings of love Tuesday, October 7, 2014. He was 71 years of age. He was baptized and confirmed at Peace Lutheran Church and graduated... View Obituary & Service Information

The family of Raymond G. Metzger created this Life Tributes page to make it easy to share your memories.