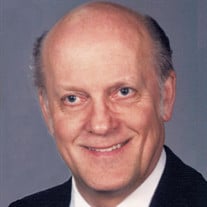 Ralph W. Olson, 87, of Meadville, PA died Wednesday, February 14, 2018 at Wesbury United Methodist Community. He was born November 15, 1930 in a farmhouse near Menomonie, WI a son of Walter J. and Florence Denning Olson. He married LuAnne Klundt August 11, 1955 in Pasco, WA and she survives. Ralph graduated from a one room grade school in Irvington, WI and then from Menomonie High School. In high school he was President of the senior class and played basketball, football as a running back and was manager of the track team. He was also a standout fast pitch softball pitcher and baseball pitcher, once pitching a 21 strikeout game. Following high school, he attended Stout Institute (now U. of Wisconsin-Stout) for two years then River Falls State Teachers College (now U. of Wisconsin-River Falls) for a year. He then enlisted in the US Air Force and was a veteran of the Korean War serving from 1951-1955 in operations of radar aircraft control and warning. Following his military service, he returned to school and graduated from the Univ. of Wisconsin with a BA degree in Chemical Engineering. In 1958 he started his career with PPG Industries as an engineer in the Sheet Glass Division working in West Virginia, Oklahoma and Illinois. He also worked on the start-up of a new plant in Salerno, Italy and led the start-up teams on plants in Inchon, Korea and Northern France. After returning to work at PPG Headquarters in Pittsburgh, PA, he served on the State of Pennsylvania Chamber of Commerce Energy Committee and on the Steering Committee of the Texas Industrial Commission International Energy Conference in 1981. He then moved to Minnesota and managed two PPG plants and served on the local board of the Chamber of Commerce and the Minnesota Assoc. of Commerce and Industry. He concluded his 33 years of service with PPG in 1991 after managing the Meadville plant for five years. He was a member of Trinity Lutheran Church, the Meadville Literary Union and the Meadville Country Club where he was an avid golfer. He served on many local boards including the Meadville Area Chamber of Commerce, Crawford County Excellence Council, Meadville Area Industrial Commission, Edinboro University Board of Advisors, Crawford County Historical Society, Martin Luther King Jr., Scholarship Foundation, Active Aging Inc., Meadville Medical Center (as Board President) and served on the Blue Ribbon Trustee Committee of the Board of the Hospital Council of Western Pennsylvania. Survivors, in addition to his wife LuAnne of 62 years, include: a brother, Richard L. Olson of Chippewa Falls, WI and his six nieces and nephews, Donald, Beth, Connie, Dale, Kathy and David all in the Chippewa Falls area. He was preceded in death by his parents. Calling hours will be Thursday from 12-1 p.m. at the OLSON FUNERAL HOME, 615 WILSON AVENUE, MENOMONIE, WI. The funeral service will follow at 1 p.m. at the funeral home with Pastor David Natzke officiating. Burial will be in Grandview Cemetery. The family suggests memorials be made to the Meadville Medical Center Foundation, 736 Liberty Street, Meadville, PA 16335.

The family of Ralph W. Olson created this Life Tributes page to make it easy to share your memories.