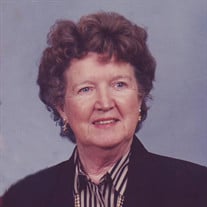 Racile M. Larson, age 94, of Menomonie, WI passed away Monday, February 9, 2015 at Mayo Clinic Health System – Menomonie. The former Racile Stevens was born Nov. 3, 1920 in Eau Galle, WI to Herbert and May (Thompson) Stevens. She graduated from Colfax High School in 1938 and from Dunn County Normal in 1940. She taught for eight years in rural schools and then in Elk Mound. On Aug. 21, 1946, Racile married Lavern E. Larson in Menomonie, after he returned from military service during W.W. II. Racile helped her husband with the upholstery business. She was a member of the Menomonie United Methodist Church and she enjoyed playing Bridge, having birthday parties for everyone and spending time with her family. Racile is survived by her children; Sally (Jerry) Siler, Mark (Jean) Larson, Barry (Cathy) Larson; eight grandchildren; Jamie Bretl, Traci (Pat) Christensen, Lance Siler, Scott Larson, Brett Larson, Matt Larson, Luke Larson, Jake Larson; seven great-grandchildren; Neil and Samuel Bretl, Ian, Sydney and Kyle Christensen, Nola and Stella Siler; also survived by other relatives and friends. She was preceded in death by her husband Lavern in 2000 and a sister, Lorraine Ahiers. A Memorial Service will be held at 11:00 a.m. Friday, Feb. 13, 2015 at Olson Funeral Home in Menomonie, with Pastor Wendy Slaback officiating. There will be visitation at the funeral home one hour prior to the service on Friday. Burial will be in Evergreen Cemetery in Menomonie at a later date.

The family of Racile M. Larson created this Life Tributes page to make it easy to share your memories.