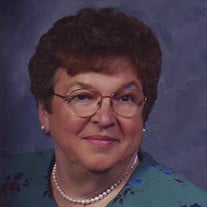 Phyllis J. Kruschke, age 88, of Menomonie, WI died Saturday, Oct. 17, 2020 at The Neighbors of Dunn County. She was born Sept. 18, 1932 in New Ulm, MN to Arnold and Lodina (Miller) Buerkle. Phyllis lived in the Fairfax and Gibbon, MN areas growing up, and was baptized and confirmed in the WELS Lutheran faith. She was a graduate of Hector High School, class of 1950. On Sept. 29, 1950 Phyllis married Ellard Borth. They were blessed with five children. They enjoyed farming and ended up in the Spring Valley, WI area. Due to the death of Ellard in 1970, Phyllis sold the farm and went to nursing school. She raised her five children and had a nursing career for 27 years and then went on to be a volunteer at MCHS in Menomonie. In 1977 Phyllis married Merlin Wilber who unfortunately was killed in a car accident in 1995. Later in life Phyllis married Lyle Kruschke who passed away in 2016 due to health issues. Phyllis is survived by her five children, Allen (Nancy) Borth, Peggy (Steve) Lynum, Susan Borth Nelson, Lyall (Cindy) Borth, Judy (Mike) Kietzer; many grandchildren and great-grandchildren; a brother Jerry (Margie) Buerkle; and several nieces, nephews and other relatives. Phyllis was also blessed to have many stepchildren and their families. She was preceded in death by her parents; her spouses; a brother Curtis Buerkle; grandson Joshua Lynum and great-grandchild Bryce. Visitation for the public will be held from 10:00 a.m. to 11:00 a.m. Saturday, October 24, 2020 at Olson Funeral Home in Menomonie. Private funeral services will follow with burial at St. John’s Lutheran Cemetery (Hatchville), Township of Weston, Dunn County, WI.

The family of Phyllis J. Kruschke created this Life Tributes page to make it easy to share your memories.