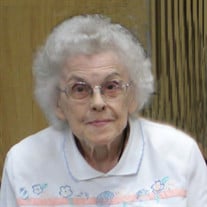 Phyllis G. Knitter passed away on Sunday October 9, 2016, at the age of 97 in Eau Claire Wisconsin and will be greatly missed by all who knew her. Phyllis Garnet, the youngest child of Raymond and Florence King Snethen, was born on August 4, 1919 in Chicago, Illinois. She attended the Chicago schools and graduated from Calumet High School in 1937. As a girl she took piano lessons and played all her life. She loved to dance and often went to dances with her friend Myrtle in Chicago. She was a member of Rainbow Girls during high school. One of her first jobs after school was with Marshall Fields in Chicago as an ‘elevator attendant’. She married Eugene Morgan and they had a son Roy in 1939. After a short marriage, in her early 20’s she went to work for Time-Life Magazines. She was sent to different mid-western states to help set up their sale offices while her parents took care of Roy. While doing this she met Virginia Raether who became her good friend in Wisconsin. When visiting Virginia during a vacation time, she met Arthur Knitter, who was a dairy farmer in the Town of Ludington, Eau Claire County. They were married in 1946. Arthur adopted Roy shortly after they were married. They had two more sons; Wesley who was born in 1954 and Bruce in 1959. Even though she grew up in the city, she enjoyed farm life and everything that came with it. She enjoyed the times that she spent visiting with family and neighbors. She was very active with Bethlehem Lutheran Church as piano player, Sunday School Superintendent and teacher. She was also a member of the Bethlehem Ladies Aid. In her spare time she was 4–H assistant and leader. Phyllis loved the Cubs all her life and was quite knowledgeable about the team. Art liked the Milwaukee Braves which Phyllis would watch only if her Cubs were not on TV! After Art died in 1966, Phyllis sold the farm and moved to Eau Claire Wisconsin. There she started to work for S S Kresge which was the parent company of K-Mart. She attended Faith Lutheran in Chippewa Falls along with her longtime friend Elna Drehmel Buttenhoff. When a new Kmart opened in Menomonie Wisconsin she transferred there where she worked for the next 18 years. She attended Christ Lutheran Church where she played the piano and taught Sunday school. She was very active in the Ladies Aid at Christ Lutheran. She drove for ‘Meals on Wheels’, until as she said, “I’m as old as the people I’m bringing meals to!” She kept her hands busy making quilts for the church which then sent them overseas to people in need. In her spare time she loved to play cards and she excelled in Scrabble and crossword puzzles. Phyllis was preceded in death by her parents, Raymond and Florence; husband Arthur, brother Courtney and her oldest son Roy. She is survived by her sons Wesley H (Robin) Knitter, Bruce A Knitter (Cindy Wolf); daughter-in-law Sharon F Knitter; grandchildren Wendy, Kelly, Robert, Brian, Sarah, Joe, Courtney, Tiffani, Jesse, Elizabeth, and Taran; great grandchildren Josh, Taylor, Ryan, Landon, Logan, Nicole, Elena, Julia, Molliegh, Lilleigh, Clair, Jade and Brittany. Memorial services will be held at 10:30 a.m. on Saturday, November 12, 2016 at Bethlehem Lutheran Church in the Town of Ludington, Eau Claire Co. Wisconsin with Reverend Gary Schultz officiating. Burial will be in the church cemetery. Family and friends are welcome at the church an hour before service for time of reflection with family. A reception will follow the services at the church.

Phyllis G. Knitter passed away on Sunday October 9, 2016, at the age of 97 in Eau Claire Wisconsin and will be greatly missed by all who knew her. Phyllis Garnet, the youngest child of Raymond and Florence King Snethen, was born on August 4,... View Obituary & Service Information

The family of Phyllis G. Knitter created this Life Tributes page to make it easy to share your memories.