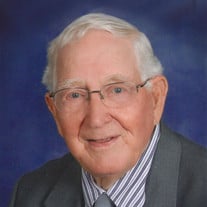 Peter Eugene Peterson (Gene) age 97, of Menomonie, WI passed away peacefully on Monday, August 5, 2019 at Comforts of Home in Menomonie. He was born on July 20, 1922 in Chippewa Falls, Wisconsin to Peter and Louise (Hopen) Peterson. He attended high school in Chippewa Falls and was drafted into the Army in 1942. He proudly served in the Pacific during World War II as a mechanic in New Guinea and the Philippines. After his World War II service, Gene returned to Chippewa Falls and met Irma Gubrud. They were married on August 23rd, 1947 in Chippewa Falls and settled there to raise their four children. Gene worked as a mechanic, welder, electrician, salesman and State boiler inspector. He traveled as far as Greenland for welding jobs. He was never afraid to learn a new skill or travel to find work. Sadly, Irma died of cancer in 1984. In 1986, Gene married, Joyce Peterson, of Menomonie. They split their time between Wisconsin and Florida, enjoying golfing, traveling in their motor home, ham radio and Civil Air Patrol. They were married for 18 years before she died of cancer in 2004. In his later years, Gene found another special lady, Marjorie Herrick. Marge and Gene were constant companions in their Florida Deer Park golf community and loved to travel, bowl and volunteer. In 2012, Gene moved back to Menomonie and Marge moved closer to family in Massachusetts. They continued to talk on the phone until Marge died in 2018. Gene loved to fly airplanes and flew many missions with the Civil Air Patrol. He was often called upon to search for missing aircraft in the Wisconsin Northwoods. If he wasn’t flying, he was playing ball. He excelled at tennis, but his real passion was golf. He golfed almost every day in retirement. In the 2009 National Senior Games, Gene placed 5th overall in the 85-89 age category. Gene is survived by his children, Barry Peterson of Tomah, Richard (Mary Anne) Peterson of Chippewa Falls, Jean (Michael) Adair of Bentonville, VA and Joan (John) Friedenfels of Menomonie; step-children, Tim(Jan) Peterson, Minneapolis, MN and Judy Kirk of Menomonie; five grandchildren, Terry (Erin) Peterson of Nashville, TN, Sara (Dave) Benedict of Menomonie, Jared Friedenfels of Menomonie, Ashley Friedenfels of Bentonville, VA and Stefani Friedenfels of Jacksonville, FL; three great-grandchildren, as well as many nieces, nephews, other relatives and friends. He is preceded in death by his parents, Peter and Louise, sister Lorrain, brothers Peter, Myron and Robert. Gene loved life and never met a stranger. He survived the Great Depression, World War II, loss of two fingers, loss of his mother at the age of 14, loss of two wives and yet still found reasons to smile, be happy and live life to its fullest. His lessons for living a long and happy life are memorialized in a book he co-authored with his daughter, Jean, titled, That’s Just the Way it Goes. Special thanks to the staff at Comforts of Home in Menomonie. He loved “his girls” and the staff that cared for him these past years. Gene’s faith, his church and God were always there to remind him that we pass through this life by the grace of God, and we leave this life when God deems the time is right. Funeral services will be held at 1 p.m. on Thursday, August 8th at Our Savior’s Lutheran Church in Menomonie with Pastor Sarah Miller officiating followed by Gene’s favorite dessert -- pie. There will be visitation at the church one hour prior to the service on Thursday. Burial will follow at the Prairie View Cemetery in Chippewa Falls with military honors by Chippewa Falls Patriotic Council. Olson Funeral Home in Menomonie is serving the family. In lieu of flowers donations can be made to the Our Savior’s Lutheran Church (Memo: Luther Park Building Fund), 910 9th St E, Menomonie, WI.

Peter Eugene Peterson (Gene) age 97, of Menomonie, WI passed away peacefully on Monday, August 5, 2019 at Comforts of Home in Menomonie. He was born on July 20, 1922 in Chippewa Falls, Wisconsin to Peter and Louise (Hopen) Peterson. He attended... View Obituary & Service Information

The family of Peter Eugene Peterson created this Life Tributes page to make it easy to share your memories.