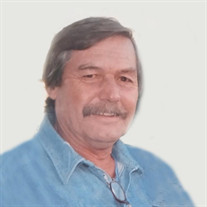 Peter V. Hintzman, age 67 of Menomonie, Wisconsin, passed away peacefully with his wife and son by his side Tuesday, February 26, 2019 at Mayo Clinic Health System – Menomonie. He was born March 27, 1951 in Faurndau, Germany and was adopted with his sister, Monika, by their parents Victor and Virginia (Wolfgram) Hintzman. Pete married Linda (Webster) Pember on June 27, 1998 at their home in Menomonie. In Pete’s younger years, he was a member of the Menomonie Water Ski Team and was a 1969 graduate of Menomonie High School. He lived the majority of his life in Menomonie and had a heart for raising animals with his son Matt, especially birds. Pete was a man who enjoyed the outdoors and working with heavy equipment. He spent 30 years moving, hauling and excavating the land with Pember Companies. After retirement, he continued his love of the outdoors with Linda, gardening and pruning their beautiful roses. He spent many hours designing and creating a pond for his family to enjoy. Pete’s eight grandchildren were a big part of his life. He truly enjoyed the time he spent them and loved them with all his heart. Pete is survived by his wife Linda; son Matthew (Rebecca) Hintzman; step children, Joe (Heather) Pember, Eric (Coleen) Pember, Brent (Jill) Pember; grandchildren, Kaylee and Lauren Hintzman, Ryan (Haley) and Jake Pember, Raymond and Luke Pember, Chase and Tyler Pember. He is also survived by his sister Monika Korkiszka; niece Kayla, and nephew Aron as well as other friends and relatives. He is preceded in death by his parents Victor & Virginia Hintzman. Funeral services will be held at 11:00 am on Tuesday, March 5, 2019 at Olson Funeral Home in Menomonie, WI with Pastor Shawn Kauffeld officiating. Visitation will be held from 9:00-11:00 am at the funeral home with lunch to follow the funeral service. Olson Funeral Home of Menomonie, WI is serving the family.

Peter V. Hintzman, age 67 of Menomonie, Wisconsin, passed away peacefully with his wife and son by his side Tuesday, February 26, 2019 at Mayo Clinic Health System &#8211; Menomonie. He was born March 27, 1951 in Faurndau, Germany and was... View Obituary & Service Information

The family of Peter V. Hintzman created this Life Tributes page to make it easy to share your memories.