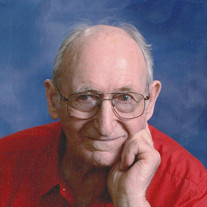 Paul W. Pellett of Menomonie WI passed away Monday, September 16, 2019 at age 93. He was born April 16, 1926 to Orval and Freda (Buchanan) Pellett in Viola, WI. He graduated from Viola High School in 1944 where he played tuba in the marching band. After graduating, he joined the army and watched the Statue of Liberty disappear on his 19th birthday as he traveled by ship heading to Germany to fight in WWII. He shared many stories of serving in Europe, including enormous waves on his trip home after the war. He attended and graduated from UW-Madison in 3 yrs following his return. Paul became a veteran's agriculture teacher at Gilman, WI. There he met Jennie Berentsen and they married in 1951. They purchased Jennie's parents' farm in Prairie Farm, WI where Paul served on the school board and the fire brigade. Seven years later they purchased Atlasta Farm on Tainter Lake, building it into a reputable all-registered Jersey dairy farm. They built a new home in 1966. During these years, he served on many agricultural and church boards, veteran’s groups, and was on the Honor Guard. Many Jersey and family picnics were held at Atlasta Farm as well as an International Jersey convention and picnic in 1979. Paul is survived by seven children: Carol (Saw-Mehone Tebedge) Pellett, Earl Pellett, Betty (Roger) Herman, John Pellett, Gloria (Michael) Keck, Shirley (Kevin) Gottwalt, and Allen Pellett, sixteen grandchildren, eighteen great-grandchildren, and many great-great-grandchildren! He is also survived by brother, Allwin Pellett and brother-in-law, Robert Whitman, as well as many other relatives and friends. Paul was preceded in death by his parents; wife, Jennie Pellett; brother, Vernon Pellett; sister, Celia Janssen; and several sisters-in-law and brothers-in-law. A Celebration of Life will be held at 11:00 a.m. Friday, Sept. 20, 2019 at Tainter United Methodist Church in the Town of Tainter, Dunn Co. WI with Pastor Craig Conklin officiating. There will be visitation at the church one hour prior to the service on Friday. Burial will be in Northern Wisconsin Veterans Memorial Cemetery in Spooner, WI at a later date. In lieu of flowers memorials are suggested to Tainter United Methodist Church or the Shirley Doane Senior Center.

Paul W. Pellett of Menomonie WI passed away Monday, September 16, 2019 at age 93. He was born April 16, 1926 to Orval and Freda (Buchanan) Pellett in Viola, WI. He graduated from Viola High School in 1944 where he played tuba in the marching... View Obituary & Service Information

The family of Paul W. Pellett created this Life Tributes page to make it easy to share your memories.