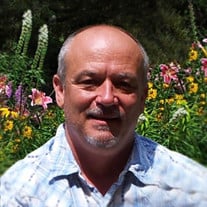 Paul A. Calenberg Paul Anthony Calenberg, age 62, Professor Emiritus at the University of Wisconsin Stout, passed away Wednesday, February 23, 2022 at his home. He is survived by his husband, Richard (Dick) Nimke and their beagles; brother John (Sara) Calenberg of Glen Ellyn, Il; sister Mary Jo (James) Bohn of Grafton, WI. He is proceeded in death by his parents Werner and Barbra (Quest) and his brother Mark. Paul was born in Milwaukee and grew up in Cedarburg, WI. He received his B.A. from the University of Wisconsin Oshkosh and his M.F.A. from the University of Wisconsin Madison. Paul taught at UW Stout for over twenty years and was the Chair of the Department of Communications Studies, Global Languages and Performing Arts, and the Director of Theatre until his retirement in 2020. Paul was proud to receive the Diversity Award for creating an accepting environment from UW Stout. Throughout his career it was his goal to create an inclusive, and quality educational, and theatrical experience for the audience and his students. During his more than forty years in theatre as an educator, director, choreographer, and actor, Paul worked on over two hundred productions. In addition to theatre, he enjoyed cooking, traveling, working in the yard, and spending time with family and friends. Paul would have most appreciated a glass raised in a toast to him. A Memorial Service will be held at 11:00 a.m. Saturday, March 5, 2022, at the Harvey Hall Theater, in Menomonie, WI. There will be a visitation one hour prior to the service in the Theater. Olson Funeral Home in Menomonie is serving the family. The University of Wisconsin Stout requires all attending to wear face coverings/masks. Charitable contributions can be made to underdogrescuemn.com

Paul A. Calenberg Paul Anthony Calenberg, age 62, Professor Emiritus at the University of Wisconsin Stout, passed away Wednesday, February 23, 2022 at his home. He is survived by his husband, Richard (Dick) Nimke and their beagles; brother... View Obituary & Service Information

The family of Paul A. Calenberg created this Life Tributes page to make it easy to share your memories.