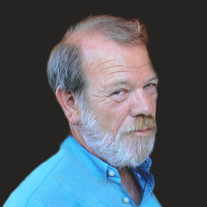 Patrick Leonard Molitor, age 68, of Springbrook, WI, passed away peacefully on Monday, August 28, 2017 surrounded by family and friends after battling lung cancer. Patrick was born on May 13, 1949 to Leonard and Emma (Brantner) Molitor in Eau Claire, WI. He graduated from Elk Mound High School. From 1969-1970 he served his country as part of the U.S. Army Military Police. In 1971 he married Carol Ellingstad. Pat worked in the wooden truss industry for over 45 years which included Menards, Wisconsin Truss and Trussworks. Pat was known for his unique sense of humor. He enjoyed working on cars, boats, snowmobiles and almost everything with a motor. Pat was an active member of the Red Cedar Classic Car Club. He took advantage of every opportunity to attend his kids and grandkids sporting events and also touring the countryside with his girlfriend Kim. Pat is survived by his children, David (Sara) Molitor of Eagan, MN, Thomas Molitor of Cable, WI; grandchildren, Charles Molitor and Katelyn Molitor; sisters, Judy (Jim) Round, Barbara (Paul) Stobb, Linda (Paul) Cook; brothers Dan (Jill) Molitor, Mark Molitor (Connie); special friend Kim Hase; as well as nieces, nephews, other relatives and friends. He was preceded in death by his parents. Funeral Services will be held at 2:00 p.m. Friday, September 1, 2017 at St. Joseph’s Catholic Church in Elk Mound with Father Joseph Nakwah officiating. Burial will be at the Northern Wisconsin Veterans Memorial Cemetery in Spooner at a later date. Visitation will be Thursday, August 31, 2017 at Olson Funeral Home in Menomonie from 5:00 p.m. to 8:00 p.m. and also one hour prior to the service at the church on Friday.

Patrick Leonard Molitor, age 68, of Springbrook, WI, passed away peacefully on Monday, August 28, 2017 surrounded by family and friends after battling lung cancer. Patrick was born on May 13, 1949 to Leonard and Emma (Brantner) Molitor in Eau... View Obituary & Service Information

The family of Patrick L. Molitor created this Life Tributes page to make it easy to share your memories.