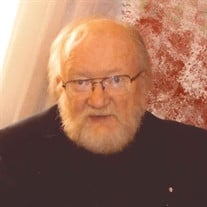 Orville Elias Hendrickson, Jr. died early in the morning of January 21 at MCHS – Red Cedar after dealing with many health problems especially the last few years. He was born in Menomonie, WI to Orville E., Sr. and Martha S. (Lestrud) Hendrickson on January 23, 1935. During his younger life he spent lots of time with his friends and when he got in trouble at home his punishment was to “straighten nails”. He was in Boy Scouts and earned his Eagle Scout and was proud to be involved in the ceremony at Camp Phillips when it was dedicated. He was confirmed at Our Savior's Lutheran Church in Menomonie. He graduated from Menomonie High School in 1953 and entered the Air Force. He had training at several bases and finally went to Moriarity, NM (Mother Goose) to work at a radar station in the mountains. He always said “lots of dust and wind” but certainly enjoyed the guys he worked with. They had a reunion every 2 years for at least 20 years. After returning from the Air Force he met and married Marguerite Danielson. They adopted a little boy in 1967 that grew their family to 5 children. They later divorced. He worked at the 1st Bank in Menomonie and Barron. Then started as a student at UW-Eau Claire. He met Virginia (Ginny) Fuchs and got married in March of 1973. A new job working for the Department of Revenue moved them to Milwaukee. A baby girl was born in 1978. He transferred to Department of Revenue – Property Assessment & Equalization in Eau Claire to be closer to some family. He eventually built a house on Tainter Lake which he lived in about 30 years until his death. He retired from his job early due to medical problems. He was preceded in death by his mother and father, brother Ellwyn, uncle Cyrus Lestrud and wife Helen and uncle Elmore Lestrud and wife Ruby. He is survived by his wife Ginny, son Steve, grandson Christopher and his family, daughter Erika, granddaughter Alisyn. He is further survived by his brother Robert and wife Sue, niece and nephew, cousins, sister in-law and mother in-law. He loved his family, feeding the birds, cars and motorcycles. He wasn't one to get out a lot but could talk to anybody about almost any topic. There will be a public Masonic Service by Menomonie Lodge 164 F. & A.M.at 1:00 p.m. on Thursday, Jan. 26, 2017 at Olson Funeral home in Menomonie, with visitation at the funeral home one hour prior to the service. Burial will be in Cedar Falls Cemetery following the Masonic Service.

The family of Orville E. Hendrickson created this Life Tributes page to make it easy to share your memories.