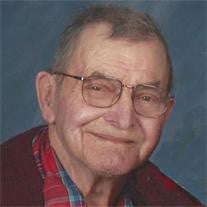 Orvald Thompson passed away March 1st, 2013 with his family around him at Luther Hospital in Eau Claire, WI. Orvald (Orv) was born in Eddy County North Dakota on November 15th, 1931 to Oscar and Elsie (Soderstrom) Thompson. Orvald, the second of 4 children to Oscar and Elsie had 3 siblings- Alden, Marvin (Buddy), and Ardis (Sis). Orvald spent his early years working on his parent's farm in North Dakota where they raised Winter Wheat and Rye as well as operated a dairy farm which supplied milk to the town in which they lived. In 1947, Oscar and Elise moved their farming operation to Wisconsin bringing Orvald and his siblings to Glenwood City area where he graduated with the class of 1949. In 1951, Orvald joined the Army to serve his country in the Korean War. Upon returning, he was employed to work on the St. Lawrence Seaway. In 1959, Orvald went to the University of Wisconsin-River Falls to pursue a degree in Agriculture. He enjoyed farming and took additional classes through the Dairy Outreach program at WITC-New Richmond. In 1967, he met Beverlye (Erickson) Garey. They were married on November 24, 1967. Soon after marrying Beverlye, Orv took over his father's farm and continued farming until the mid 1980's. He and Beverlye were active members of Holy Cross and frequently worked with Oscar and Elsie at the Holy Cross Fairstand. In the mid-1980's Orvald passed the farm to his son Duane and began driving semi over the road. He enjoyed being on the road and continued to drive until December of 2012. He is survived by his wife, Beverlye of Boyceville. Two Children, Duane(Donna) Thompson of Glenwood City, WI , Amy(Warren) Hanson of Downing, WI. Five Step Children John (Pam) Garey of St. Paul, MN, Curt (Joleen) Garey of Blaine, MN, Cindy (Greg) Weizenegger of Sartell, MN, Becky (Steve) Nyhus of Glenwood City, WI, and Kevin (Becky) Garey of Cambridge, MN. He is also survived by several grandchildren, great grandchildren, relatives and friends. He was preceded in death by his parents, Oscar and Elsie; his brothers Alden and Marvin (Buddy), his sister Ardis (Sis), stepson Douglas, daughter-in-law Sheila, and his great granddaughter Kyrstin. Funeral services will be held at 1:00 p.m. Friday, March 8, 2013 at Trinity Lutheran Church in Boyceville with Pastor Brad Peterson officiating. Burial will take place in Glenwood Cemetery, Glenwood City, WI. Visitation will be one hour prior to the services at the church.

Orvald Thompson passed away March 1st, 2013 with his family around him at Luther Hospital in Eau Claire, WI. Orvald (Orv) was born in Eddy County North Dakota on November 15th, 1931 to Oscar and Elsie (Soderstrom) Thompson. Orvald, the second... View Obituary & Service Information

The family of Orvald Thompson Obituary created this Life Tributes page to make it easy to share your memories.

Orvald Thompson passed away March 1st, 2013 with his family around...