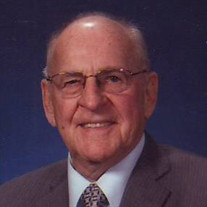 O.K. Hedlund, age 83, of Menomonie, formerly of Boyceville, passed away Saturday, October 11, 2014 at his home. Oliver Kellogg “O.K.” Hedlund was born on June 22, 1931 on a farm northwest of Boyceville to Martin R. and Edna (Kellogg) Hedlund. The family moved to Boyceville in 1944 and he graduated from Boyceville High School in 1949. After one and one half years at Luther College, Decorah, Iowa O.K. enlisted in the U.S. Army and served three years, one of which was in Korea, prior to his discharge in 1954. On December 26, 1953 O.K. married Roberta J. Bodette and from this union five children were born who have blessed them with ten grandchildren and three great-grandchildren. O.K. joined Hedlund Mfg. Co. Inc., a family business, in 1955, and was there until he was the sole survivor of the original four owners. The company was sold in 1985. O.K. and Bobbie resided in rural Boyceville until 1999 when they established a home in Menomonie, WI. O.K. was a lifelong member of Trinity Lutheran Church in Boyceville, and loved his church, where he served in many positions over his lifetime. While in Boyceville he served in positions with the American Legion, Boyceville Village Board, School Board and other organizations. In Menomonie he served with the V.F.W., The ARC of Dunn Co., Disabled and Elderly Transportation and was a member of the Executive Committee for Dunn Co. Farm Progress Days. He was a volunteer driver for the Office on Aging for a number of years and enjoyed transporting dialysis patients for almost five years. After retirement much time was spent fishing, hunting, boating and enjoying their cabin in northern Wisconsin with family and friends. O.K. was very proud to have been one of the founding members of the Dunn Co. Assn. on Alcohol and Drug Abuse, now Arbor Place, and served that organization in various positions. In his later years he enjoyed gardening and sharing the harvest with neighbors and friends. He was preceded in death by his parents, an infant brother Donald and his sister Ruth. O.K. is survived by his wife Bobbie; five children, Kristin (Kenneth) Carlsrud, Julianne (William) Fisher, Laura (John) Salmi, Rebecca Johnson, Martin (Brenda) Hedlund; ten grandchildren, Jeremy (Rachel) Carlsrud, Bethany (Daniel) Weiland, Judson (Megan) Fisher, Chelsea Fisher, Hayley (Andy) Fisher, Ian Salmi, Alexandra Salmi, Sam Johnson, Nicole Hedlund and Eric Hedlund; three great-grandchildren, Ava Trinity Salmi, Gracie Weiland and Fox William Fisher. Funeral services will be held at 2:00 p.m. Saturday, Oct. 18, 2014 at Trinity Lutheran Church in Boyceville, WI with Pastor Brad Peterson officiating. There will be visitation at the church from 11:00 a.m. Saturday until the time of the service. Burial will be in Tiffany Cemetery in Boyceville with military honors conducted by Harmon-Harris American Legion Post 314 and Menomonie Veterans Honor Guard. Olson Funeral Home of Menomonie is serving the family. It was O.K.’s request that memorials be given to Trinity Lutheran Church or Arbor Place.

The family of O.K. Hedlund created this Life Tributes page to make it easy to share your memories.