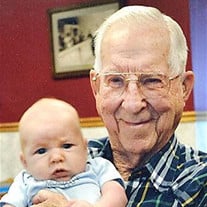 Norman Danielson, age 94, passed away December 18, 2018, at Wissota Place in Chippewa Falls, WI. He lived there for two years and our family cannot say enough good things about the love and care received at Wissota Place. Thank you to all the staff and especially to his “Flirt” Laura and his “Flirt” Wendy. Norman was born December 23, 1923, above the tarpaper blacksmith shop in Seeley, WI owned by his parents, Carl Edwin Danielson and Cornelia (Galtrude) Danielson. Carl and Cornelia had five boys; Harley, Norman, Floyd, Glen and Eddie. He attended high school through 10th grade. To do so, he had to live in a rooming house in Hayward, WI during the week and, either walked the 10 miles back to Seeley or, found a ride home on weekends. During high school and after, he worked in his dad’s blacksmith shop, on farms, in the logging industry and at CC camps. Norman married Marguerite Rasmussen of Cable, WI and together they moved to Oregon and then California where he served in the Army Air Force from 1941-1945 as an airplane mechanic and pilot. They had four children; Susanne was born September 4, 1944, Norman, Feb. 17, 1947, Steven, July 5, 1949, and Deanna, August 13, 1954. He attended welding, mechanic and machine tool schools in Eau Claire and Milwaukee after an honorable discharge from the service. He returned to Seeley to work with his father and built a small home east of Seeley. In the early 1950’s, he was recruited by Bernie Nelson of Boyceville, WI to work at Nelson Implement as a welder, mechanic and salesman. Bernie died and Norman took over the business with Bernie’s wife, selling, servicing and repairing International Harvester farm implements and machinery. Norman worked at Presto Industries during the Vietnam war. In the late 1960’s, Norman and his oldest son, Norman, cut large white pine trees during the winter on Dick Thanum’s farm south of Seeley. The logs were sawed into lumber, dried and used by Norman and his sons to build a home and workshop east of Boyceville. Norman lived and operated a blacksmith shop, welding and repair shop there until he retired in about 2015. He was a genuine workaholic, always working to fix or build something for someone. He was a jack of all trades; carpenter, plumber, electrician, welder, mechanic, engineer, farmer, dancer and joke and story teller supreme. Thankfully he slowed down and discovered that he loved his breakfasts with friends at the Downing Cafe, music and dancing. He had a passion for polka and for dancing with daughter Susie, former wife and special friend Delma, friend Joyce and many others. He was preceded in death by wives Marguerite and Sara, his parents, brother Harley (killed in WWII), brother Floyd and daughter Susie. He is survived by brothers Glen (New Mexico) and Eddie (Oregon), son Norman (Deforest), son Steven and wife Eileen (Eau Claire) and daughter Deanna (Chippewa Falls). Burial December 26, 2018, 1:00 pm at Sherman Cemetery next to his dad and daughter Susie. A celebration of life gathering will be held after the holidays.

Norman Danielson, age 94, passed away December 18, 2018, at Wissota Place in Chippewa Falls, WI. He lived there for two years and our family cannot say enough good things about the love and care received at Wissota Place. Thank you to all the... View Obituary & Service Information

The family of Norman Danielson created this Life Tributes page to make it easy to share your memories.