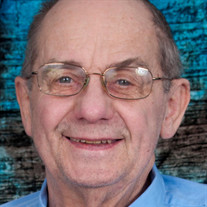 Noel James Christian Falkofske, 79, died of lung cancer at his Knapp, Wisconsin, home surrounded by family on September 5, 2015. Noel was a genius, a creative and humble man, whose kindness and humor touched everyone he knew. His antics of running up to strangers to tell jokes is well known. His selfless acts lifted many out of sorrow (and boredom). Noel is survived by his wife Karin, his son James, his daughter Sara, his son-in-law Jeff Laikind, and his granddaughters Anna and Noelle Laikind. Noel is also survived by his brothers Gordon, Tom, Frank, and Tim Falkofske, and his sister Donna Kinneman. He was preceded in death by his parents Nellie (Bartlett) and Edwin Falkofske and his brother Burton. Noel was born on December 23, 1935, the third of seven children, and grew up on the family farm in Ellsworth, Wisconsin. He attended Clayfield School, Ellsworth High School, the University of Wisconsin-River Falls (BA), and Kent State University (MA). Except for the dissertation, he completed all of the requirements for a Ph.D. in theater in Eugene, Oregon. After serving in the army from 1957 to 1960 he had a long and successful career as an educator. He taught at Monticello Junior College for Young Ladies in Alton, Illinois, before coming to the University of Wisconsin-Stout in Menomonie, Wisconsin, where he taught speech and managed all aspects of the theater program. At Stout he met his soon-to-be wife, Karin, who also taught speech. Together they formed a theater team that produced plays for Stout, the Menomonie Theater Guild, and the Mabel Tainter. He loved theater, juggling home and work to spend every spare moment creating scenery, sewing costumes, setting lights, building furniture, creating props, writing scripts, and acting. His work as an artist has brought tremendous joy to his audiences. While humble, he was never shy. He enjoyed pulling strangers aside to say, “Hey, Dude, aren’t you my third cousin twice removed?” Bringing laughs to complete strangers was a daily mission. In his home, even at the end of his life, he continued to share jokes, “war stories,” and advice. As a final gift to the world, Noel donated his body to the University of Minnesota for scientific research and medical education. His family is collecting stories and memories that capture his philosophies and sense of humor. This celebration of his life will be presented on the main stage of the Mabel Tainter Center for the Arts on Sunday, October 4th at 2 p.m. A reception will follow in the basement. The address for the event is 205 Main Street East, Menomonie, Wisconsin. Please share your memories of Noel on the Facebook tribute page titled Celebrating Noel Falkofske:www.facebook.com/groups/1491349671186702/ or mail them to Karin Falkofske, N7243 190th ST, Knapp, WI 54749. Noel’s Repair Fund for the MTG Building Noel spent fifty years volunteering his time and talents to the Menomonie Theater Guild. In honor of his generosity, his family and friends are collecting donations of cash, time, and expertise, to improve the safety and appearance of MTG’s second story. The family hopes to raise $50,000. Donations will help repair the props and furniture storage area including the flooring, ceiling, and electrical. Contributions may be tax deductible. Inquiries should be sent to James Falkofske via the tribute page. Donations should addressed to Noel’s Fund c/o Menomonie Theater Guild, PO BOX 445, Menomonie, WI 54751.

Noel James Christian Falkofske, 79, died of lung cancer at his Knapp, Wisconsin, home surrounded by family on September 5, 2015. Noel was a genius, a creative and humble man, whose kindness and humor touched everyone he knew. His antics of running... View Obituary & Service Information

The family of Noel J. Falkofske created this Life Tributes page to make it easy to share your memories.

Noel James Christian Falkofske, 79, died of lung cancer at his...