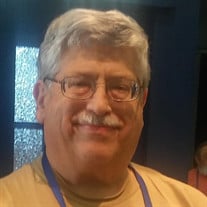 Michael M. Levy, Menomonie, died April 4, 2017, of cancer after a brief period of hospitalization and hospice care. Levy was born April 15, 1950 in Chicago IL. From the beginning he was a little professor, teaching himself to read from Dr. Seuss books at age five and later teaching his younger cousin John Block that same way. Throughout his school years, he always walked to school with an open book in his hand. He attended the University of Illinois for his BA (1972), Ohio State University for his MA (1974), and the University of Minnesota for his PhD (1982). He began teaching English at the University of Wisconsin Stout in 1980, where he remained for his entire career, teaching courses in Composition, Children’s literature and Science Fiction and serving as Chair of the English Department for approximately seven years. Throughout his career, he mentored many and was beloved for his kind, level-headed guidance and wisdom. Levy was a noted expert on children’s, YA, and SF/F literature and served as President of both the Science Fiction Research Association and the International Association for the Fantastic in the Arts, where his effective leadership helped both organizations move into the 21st century by embracing gender and diversity in their leadership. He was an editor for the journal Extrapolation starting in 2006 and reviewed extensively for Publishers Weekly, The New York Review of Science Fiction, and other publications and served as an editorial board member of The Journal of the Fantastic in the Arts from 2010 onward, positions which allowed him to indulge in his book addiction without actually buying many of them. His book reviews and essays number in the thousands. With Farah Mendlesohn, he co-wrote Children’s Fantasy Literature: An Introduction (2016). Other critical books include Portrayal of South East Asian Refugees in Recent American Children’s Books (2000), and Natalie Babbitt (1991), as well as an annotated edition of A. Merritt’s The Moon Pool (2004). He also drew maps for fantasies by P.C. Hodgell. Throughout his life, Levy was actively engaged in secular humanism, supporting many human and animal rights charities. He is survived by his wife of 34 years, teacher/editor/poet Sandra J. Lindow, and their two children Scott McDonald and Miriam Levy. A celebration of his life will be held April 29 at 1:00 p.m. at First Congregational United Church of Christ, 420 Wilson Ave., Menomonie, WI. Those in attendance are urged to wear their favorite t-shirts. Memorial gifts can be given to various charities including the Dunn County Humane Association, the American Cancer Society or Planned Parenthood.

Michael M. Levy, Menomonie, died April 4, 2017, of cancer after a brief period of hospitalization and hospice care. Levy was born April 15, 1950 in Chicago IL. From the beginning he was a little professor, teaching himself to read from Dr.... View Obituary & Service Information

The family of Michael M. Levy created this Life Tributes page to make it easy to share your memories.