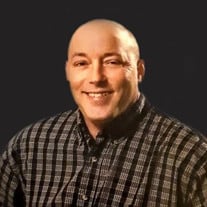 Michael P. Haviland, age 52, of Menomonie, WI passed away Sunday, January 20, 2019 unexpectedly. Michael was born on September 1, 1966 in Hastings, MN to Paul Edward and Margaret Mary (Keilen) Haviland. He grew up in Baldwin, WI and Lake City, MN and graduated High School in Lake City with the class of 1985. After high school Michael joined the Navy. He spent 10 years in the Navy as a military air traffic controller. The majority of his time with the military was spent in the Mediterranean Sea and “on the ice” in Antarctica. He helped set up an airport on the glacier and certify other airmen for the FAA and he absolutely loved what he did. He was called back to the ship during Desert Storm/Desert Shield but the war ended before the ship left the Port. After leaving the Navy, Michael helped his dad in the construction industry before taking a job with an Eau Claire, WI home builder. In March of 2000, Michael started his own company, Mike Haviland Construction (MHC, Inc.). He enjoyed the creative side of building custom homes and and was featured in the Builder’s Journal as Builder of the Year. He also enjoyed golfing, football, travel and helping others in need. Michael is survived by his girlfriend Diane Jasicki; sons, Ryan 26, of Cameron, WI, Jacob 18, attending college at UTI in Wheaton, ILL, Christopher 17 and Nicholas 15 both of Menomonie, WI; his parents Paul and Margaret Haviland of Menomonie, WI; his brothers Richard (Lisa) Haviland of Boyceville, WI and Paul (Angie) Haviland of Lake City, MN and his sisters, Chris (John) Stelzer of Lake City, MN and Cathy (Troy) Zunker of Menomonie, WI; and many nieces and nephews, aunts, uncles, cousins and friends. Memorial Services will be held at 11:00 a.m. on Saturday, January 26, 2019 at Christ Lutheran Church in Menomonie with Pastor Randy Skow-Anderson officiating. Visitation will be one hour prior to the service at the church. A luncheon will follow the services. Burial will take place at a later date in Northern Wisconsin Veterans Memorial Cemetery in Spooner, WI. In lieu of flowers, memorials are preferred to the family, N 7395 250th St, Menomonie, WI 54751

The family of Michael P. Haviland created this Life Tributes page to make it easy to share your memories.