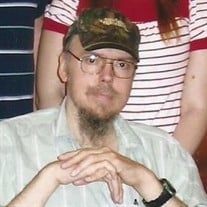 Michael William Amundson, age 55, of Menomonie WI, died in his home surrounded by loved ones in the early morning of December 24th. He was born in Beloit, WI to William James and Leona Joyce Olson Amundson, graduated from Boyceville High School in 1979, and went on to graduate from Luther College in 1983 with a BA in Psychology. He played football, sang in the choir and enjoyed spending summers as a counselor at Imago Dei Youth Camp. Michael married Patricia Larsen at Grace Lutheran Church in 1983. They had three children - Aaron, Alexander and Kia. Michael devoted his life to ministry, continuing into seminary, and serving as a youth pastor and worship leader in churches throughout Wisconsin and Illinois until his retirement. Music was a talent and a passion throughout Michael’s life. He had a calling for working with youth and a heart that remained true to his faith until his final day. He returned to Boyceville later in life to take care of his ailing mother, and remained in the area after she passed in 2012. Michael valued his family greatly, and though he struggled with failing health in the later years of life, he maintained a strong connection with his family and was a source of light and inspiration throughout. He was an avid sportsman, and enjoyed hunting and target shooting as well as camping and the outdoors. He loved history, reading and attending movies with family. He relished time spent with family, both in person and over the phone. He took every opportunity to catch up with the people he loved and be a part of their lives, no matter where they lived and despite his deteriorating health near the end. His memory and example will be cherished by those who knew and loved him. Though we miss him dearly, we find comfort in the knowledge that he has gone to a place of peace, comfort, and reunion with those who have gone before. Michael is survived by his two children, Aaron and Kia Amundson, sisters Debbie (Dan) Oakland, Vicki (Chuck) Maves, Cindy Amundson, his Uncle Ronald Amundson, Aunt Adeline Olson Carr, his beloved cat - Missy Henrietta Hermione Potter-Amundson, as well as many cousins, nieces and nephews, friends and extended family. He was preceded in death by his infant son, Alexander, parents William and Leona, his sister Linda Marie, and grandparents. A small family celebration of life will be held at Olson Funeral Home on Monday December 28th with Pastor Remy Diederich, interment at Pine Creek Lutheran Cemetery, Town of Wilson. In lieu of flowers, the family requests that memorials be given to the American Diabetes Association, the National Pancreatic Cancer Foundation or their local church to support further youth ministry. To share a memory, please visit obituaries at www.olsonfuneral.com

Michael William Amundson, age 55, of Menomonie WI, died in his home surrounded by loved ones in the early morning of December 24th. He was born in Beloit, WI to William James and Leona Joyce Olson Amundson, graduated from Boyceville High School... View Obituary & Service Information

The family of Michael W Amundson created this Life Tributes page to make it easy to share your memories.

Michael William Amundson, age 55, of Menomonie WI, died in his...