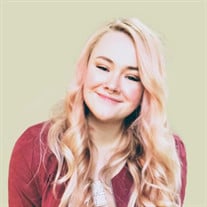 Meredith was a cherished daughter, sister, niece, granddaughter and most of all friend. She was born in Appleton, WI on September 10, 1999 and passed away on June 17, 2020. There is no perfect example of humanity in this world, but we cannot think of any as close as Meredith. She touched so many lives, leaving a positive, impactful and lasting imprint. She provided an ear, guidance, friendship or just her presence whenever needed and always seemingly at just the right moment. Meredith was extremely loyal and caring to all without prejudice or thought of herself. She had the most infectiously positive attitude with a smile, laugh and hugs that would draw you to her immediately. She was creative from early childhood, constantly painting, drawing, singing or playing music on her many instruments. She loved to bake and would deliver cupcakes to her mother’s workplace or just make a random cake for someone out of the blue. She was extremely studious, planning to graduate in December from UW Stout with a degree in Psychology. She was going to pursue graduate programs and a career in Advanced Behavioral Analysis working with children on the Autism spectrum. She gave her time to many, including the local high school Special Education class, her friend at the nutrition shop, several professors, Psy Chi National Honor Society and LoveYourMelon. She always tried to make time for anyone asking for help and was planning to work with the colorguard this fall at Osseo High School in Minnesota, from which she graduated in 2017. She was adventurous, having gotten to travel outside the country to Spain, Poland and Hungary as a part of HS band trips. She always commented on her tour of Auschwitz, and how impacted she was by the imagery. She was a serious lover of foods and made close friends in the restaurant world as they were often impressed with her diverse tastes even at a young age. Meredith’s passions were her pets, Brinn, a St Bernard and Tobbi, her Russian tortoise, whom she always referred to as her “little boy”. Her most loved activity was Winterguard, she marched with Osseo HS and Minnesota Brass International (MBI) for several seasons. She was extremely proud to be one of the youngest to ever join MBI, their 2nd place finish at WGI with “The Bee” show and being named Captain during the 2019/2020 season. She always talked about how much she valued the guidance and development she received from the leaders at MBI. She held family as the highest priority, always spending time with her sisters, Maggie and Ellie. Their relationship was evident the first time you met any of them. They referred to each other in almost every conversation as though the other’s experiences were their own. They were fiercely defendant of each other and always supportive in any way possible. Meredith is preceded in death by her grandparents Karen and Bruce Woods. She is survived by; sisters Maggie and Ellie (Nathan Evans) Brooks; her Mother, Kristin Kindschi; Father, Todd Woods; grandparents Kurt and Sharon Kindschi and a large close-knit family of aunts, uncles, cousins and great aunts and uncles as well. Her personality and selflessness created the largest circle of lasting friends, as evidenced by the massive outpouring of sentiment over these last few days. She touched young and old alike with no regard for any differences. Meredith fought Type 1 Diabetes from the age of 12 and we request donations be made to the Juvenile Diabetes Research Foundation in her name in lieu of flowers. The family will be hosting a gathering at Olson Funeral Home in Menomonie, WI on June 24 from 5:00 to 7:00 p.m.

Meredith was a cherished daughter, sister, niece, granddaughter and most of all friend. She was born in Appleton, WI on September 10, 1999 and passed away on June 17, 2020. There is no perfect example of humanity in this world, but we cannot... View Obituary & Service Information

The family of Meredith G. Woods created this Life Tributes page to make it easy to share your memories.