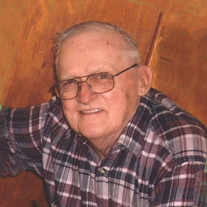 Melvin Martin Maves, age 86, of Menomonie, WI passed away at his home on Tuesday, Jan. 17, 2017 surrounded by family, after a long illness. He was born Feb. 3, 1930 in the Town of Tainter, Dunn Co. WI to Martin and Amelia (Price) Maves. Mel graduated from Menomonie High School in 1948. He then joined the Wisconsin Army National Guard where he was employed for 40 years becoming 1st Sgt. He remained in Menomonie where he enjoyed recruiting and working with many young men over the years. He was the number one recruiter in Wisconsin several times. Mel was president of the Junior Chamber of Commerce and he was an active member of Peace Lutheran Church where he held several offices. He helped in the planting of many pine trees at the new National Guard Armory in Menomonie. He was also one the men instrumental in starting the Hunter Safety Program in Menomonie. Mel enjoyed gardening, watching and feeding the birds, deer and other animals. And he always loved getting together with friends at the monthly Guard breakfasts. Mel was a kindhearted good man that would doing anything for those in need. His family was precious to him. Over Christmas and through the January 15th Green Bay Packer game he was blessed to be able to spend time with all of his family, which was the very best holiday gift he wished for. He loved to fish and his favorite story was how the big one got away because of a hole in the net. After having to give up fishing and hunting, a great joy was when his sons and grandsons would visit and bring venison and fish for him and share their stories. He was also very proud of the Maple Syrup business his grandsons, Chad and Luke had started. Mel is survived by his wife, Diane; three daughters, Linda (John) Hintz, Lesli Miller and Teri Markle; grandchildren, Chad, Luke and Michelle Hintz, Nathan Maves, Niki Maves,Sebelia Markle and Tania Brick; many great-grandchildren, and great-great-grandchildren; his brother, Gordon (Rita) Maves; as well as other relatives and friends. He was preceded in death by his parents, Martin and Amelia; his first wife, Louise; sons, Steven and Martin Maves and Douglas Cowger; and grandsons, Timothy Hintz and Levi Markle. A Memorial Service will be held at 11:00 a.m. Saturday, Jan. 28, 2017 at Olson Funeral Home in Menomonie, WI with military honors by Menomonie Veterans Honor Guard. There will be visitation at the funeral home one hour prior to the service on Saturday.

Melvin Martin Maves, age 86, of Menomonie, WI passed away at his home on Tuesday, Jan. 17, 2017 surrounded by family, after a long illness. He was born Feb. 3, 1930 in the Town of Tainter, Dunn Co. WI to Martin and Amelia (Price) Maves. Mel... View Obituary & Service Information

The family of Melvin M Maves created this Life Tributes page to make it easy to share your memories.

Melvin Martin Maves, age 86, of Menomonie, WI passed away at...