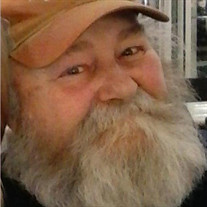 Melvin Larrabee, 69, passed peacefully from this world into the loving embrace of his savior, Jesus Christ on June 12, 2017. The youngest son of Merle and Mable (Vasey) Larrabee, Mel spent most of his childhood on the family farm in rural Menomonie. He often spoke of how happy his childhood was. He enjoyed growing up in the country, with the woods as a playground to be explored with his beloved German shepherd, Smokey. He loved to recount how all those years ago he and his brother/best friend Roger had gotten into mischief and how much he admired his big brother, Roy, and had thought of him as his protector and his "own personal superhero." From a young age, Mel had a keen mechanical mind. If it was broken, he could fix it. If you were out of solutions, he would design one. As a teen, he loved cars. His mechanical aptitude naturally grew to include engines and he left high school to become a full-time mechanic. On May 20, 1966, Melvin married Mary Rowe, and together they had five children, and later divorced. He worked for service stations in Menomonie until he bought his own, "Mel's DX", which was located on North Broadway in Menomonie. Over the years he employed many friends and relatives and was saddened when he had to close the station. During those early years Mel was diagnosed with Rheumatoid Arthritis. This excruciating and crippling disease would be a major factor throughout the rest of his life, gradually robbing him of the ability to do the activities he loved. He decided to attend CVTC and seek a new vocation. While there he won an award for having the highest GPA, and graduated with honors as a Commercial Appliance Repair Technician. Mel went to work at Duren's Hardware in Spring Valley for several years before he escaped to work at Metropolitan Service in Eau Claire. He enjoyed his years at Metropolitan and the friends he made there. On January 30, 1987, Melvin married Debora Larrabee, and together they had 3 children. They later divorced but maintained a life-long friendship. Mel liked to tease, and despite the groans and eye rolling of his family he took a great delight in bad puns and "dad" jokes. He never hesitated to say, "I love you" and give you a hug. If you were hurting he would remind you that it was going to get better. He was the kind of dad who would offer to shoot your cheating husband, or fix your car when it was -10 because you needed it for work the next day. Even though his body was tired, his blue eyes would sparkle when he talked about the things he loved, and he had a love for so many things - guns, classic cars, bow hunting, gun hunting, ice cream, gardening, astronomy and the planets, the Packers, cowboy movies, his friends from past and present, a good steak, his granddog Beau, and Kelly Ripa to name a few. Those things made him happy, but he would be the very first person to tell you that nothing held a candle to the two great loves of his life, his savior, Jesus Christ, and his children (those near & far). Mel was a man of strong faith, believing in the power and grace of Christ's love and content with the knowledge of where he would be when this life was done. Mel is survived by his children, step-children, and grandchildren: Melissa Larrabee (James Cooper) of Altoona and her children, Aislinn, Rhiannon, Conor, and Hayley Titel; Maria Morlock (Scott), Virginia Beach, VA and their son Brent; Marsha Larrabee (Gus Gospodinoff), and their children Noelle, Kyjuan and Zaida; and Melvin Larrabee, Jr. both of Chippewa Falls; Michael Larrabee (Jennifer) and their children, Selah, Elise, Josephine, and Roman of Menomonie; Stephanie (Robert) Brostrom and their children, Trebor and Bowen of Menomonie; Sarah (Matthew) Sperger and their children, Emerson, Boyd, Lincoln, and Harmon of Lake City, MN; Jonathon (Alondra) Larrabee of Chicago, Il; Selina and Hannah Larrabee both of Menomonie; brother Roy (Alice)Larrabee of Menomonie; Many nieces, nephews, cousins and friends and other relatives including Kevin Vasey who he called his third brother. Mel was preceded in death by his parents, Merle & Mable; brothers Ronald and Roger; son Matthew; and many other beloved friends and relatives. Thank you for teaching us, and loving us. We love you dad. Funeral services will be held at 2:00pm, Monday, June 19, 2017 at Forest Center Nazarene Church with Pastor Cliff Larrabee officiating. There will be a visitation from 4:00 to 7:00 p.m. Sunday, June 18, 2017 at Olson Funeral Home, and also one hour prior to the service at the church on Monday. Burial will take place at Forest Center Cemetery, in the Town of Spring Brook, Dunn Co. WI. Olson Funeral Home of Menomonie is serving the family.

Melvin Larrabee, 69, passed peacefully from this world into the loving embrace of his savior, Jesus Christ on June 12, 2017. The youngest son of Merle and Mable (Vasey) Larrabee, Mel spent most of his childhood on the family farm in rural Menomonie.... View Obituary & Service Information

The family of Melvin Lyle Larrabee created this Life Tributes page to make it easy to share your memories.

Melvin Larrabee, 69, passed peacefully from this world into the...