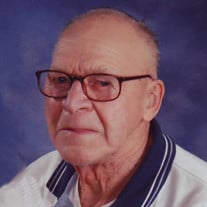 Maynard E. McClelland went to join his wife, Arlene, in heaven on April 30, 2015 at home with the care of hospice. Maynard Elwood McClelland was born in the town of Lucas, Dunn County, Wisconsin on May 17, 1926, the second son of Floyd and Ellen (Erickson) McClelland. His family purchased and moved to a farm in town of Red Cedar and he was baptized and confirmed at Little Elk Creek Lutheran church and attended school in that area. Maynard’s first love was horses and farming and he would tell of how he would run home after school so he could be the first one there to hitch up the team and do fieldwork. Maynard was joined by three more brothers and a sister and they had fun times on the farm. Maynard quit school at the age of 12 to work on area farms and on threshing crews. After the bombing of Pearl Harbor, Maynard slipped away to the cities to join the Marines but they would not take him because he was too young and his parents would not sign for him to join. After he achieved legal age, he joined the U.S. Army and proudly served his country, first at several bases in the U.S. and finally in the Philippines and Japan on a transport ship bringing the troops home. Despite being offered a job at a vineyard in California after the war, Maynard came home because “all I wanted to do was come home and milk cows.” Whenever he complained of the cold winters, his daughter reminded him they could have lived in California and she could have been a Gallo! On September 6, 1947 Maynard married his best friend’s sister, Arlene E. Mars at the parsonage in Eau Claire. They rented on several farms before purchasing their own farm, Maple Glen, near Connorsville in 1959. They lived on the farm for 53 years before having to move to town for health reasons. Maynard enjoyed anything to do with horses and animals. He was a member of Glen-Hi Riders Saddle Club of Glenwood City and rode several times at the Minnesota State Fair as well as appearing in numerous parades on horseback with the group. He liked hunting and fishing and for several years hunted near Douglas, Wyoming with his two brothers-in-law, Dick and George Mars. Maynard and Arlene had two children, Linda Ann and Steven Maynard. Steven was born on his father’s birthday May 17th. Maynard was predeceased by his parents, his in-laws, his wife Arlene (January 3, 2015) and his son Steven (2013), two sister-in-laws, a brother Alvin, and a nephew. Maynard is survived by a daughter, Linda, of Eau Claire and two beloved grandchildren, Anthony (Katrina) McClelland of the home farm at Connorsville and Julie McClelland-Komorouski (Ryan) of New Richmond and two great-granddaughters, Lillian L. and Theodora M. with a third (Dorothy L.) due in May. He is further survived by his brothers, Donald (Bonnie Parlow) of Tomah, Virgil (Kate) of Menomonie, James (Jean) of Boise, Idaho and a sister, Betty Lee (Clifford, Jr.) of Menomonie, a special Godson, Gary (Angie) of Grandbury, Texas and many nieces and nephews that he loved dearly. Special thanks to those who helped care for Dad; Janice Wnukowski who was like a daughter to him, Angel Gullikson, Karie Davis of Home Instead, and the many wonderful staff members of Oakwood Villa and Hospice. Your kindness and help will always be remembered and appreciated. Funeral services for Maynard will be at Olson Funeral Home in Menomonie at 11:00 a.m. on Wednesday, May 6, 2015, with Pastor Mark Woeltge officiating. There will be visitation at the funeral home from 4:00 to 7:00 p.m. Tuesday and one hour prior to the service on Wednesday. Burial will be at Waneka Cemetery in town of Spring Brook, Dunn Co. WI with military honors by Menomonie Veterans Honor Guard.

Maynard E. McClelland went to join his wife, Arlene, in heaven on April 30, 2015 at home with the care of hospice. Maynard Elwood McClelland was born in the town of Lucas, Dunn County, Wisconsin on May 17, 1926, the second son of Floyd and... View Obituary & Service Information

The family of Maynard E. McClelland created this Life Tributes page to make it easy to share your memories.