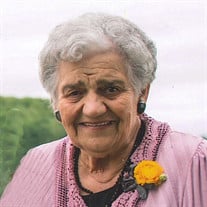 Maxine Joyce Cole, age 84, of Menomonie (formerly of Boyceville), passed away peacefully on February 23, 2019, at The Neighbors of Dunn County in Menomonie. Maxine was born on April 7, 1934 to Clifford and Gala (Adams) Evenson in Menomonie. Maxine attended grade school and high school in Menomonie, graduating from Menomonie High School in 1953. During her high school years Maxine lived with her grandmother (Mary Adams) in North Menomonie so that she could work part-time as a waitress at the Kernel Restaurant in North Menomonie. She also worked one summer at a White Castle in St. Paul, MN. On August 14, 1954, Maxine married Duane Cole in Menomonie, where together they raised two children. Maxine continued working at the Kernel until going to work at the Dunn County News for eight years, when the family moved to Boyceville where Maxine and Duane owned and operated Cole's Bar. After selling the Bar, Maxine and family moved to a farm North of Boyceville. Maxine returned to work at the Dunn County News for a few years before she began working at the National Bank of Boyceville. After selling the farm Maxine and Duane moved just outside of Boyceville, purchasing several acres and building a new home. Maxine served 20 years as the Town Clerk for the Tiffany Township. In addition, Maxine also served as Secretary/Treasurer for the Tiffany Cemetery Association the Boyceville Young At Hearts Club, part-time bookkeeper at Interstate Lumber and Smith Implement in Boyceville. In 2010, Maxine moved to Menomonie to be closer to her daughter and family. Maxine thrived on keeping busy, especially keeping her yards beautifully landscaped with flowers and rock gardens. She also loved all her dogs that she raised throughout the years. It broke her heart when she had to give up her beloved little dog Teddy when she moved to an Assisted Living Facility in Menomonie. Maxine will be dearly missed by her family and all who knew her. Maxine is survived by her son Steven (Julie) Cole (Gilbert, AZ), daughter Debbie (Donnie) Dillon (Menomonie); grandchildren Trevor Dillon (Menomonie), Stacy Cole (Arlington, TX), Lacey (Lucas) House (Menomonie), Hunter (Renata) Cole (Mesa, AZ); special great-granddaughter Cierra Rose House (Menomonie); step-grandchildren Joel (Terri) Dillon (Menomonie), Hope (Rick) Burgraff (Boyceville), Heidi (Jeremy) Schadow (Amery); seven step great-grandchildren and two step great-great-grandchildren; sisters-in-law Sharon Evenson (Boyceville), Jean Cole (Osseo), Janice Cole (Chetek), aunt Alice Evenson (Menomonie); special first cousin Eileen Stark (Menomonie); as well as many other relatives and friends. Maxine is preceded in death by her husband (Duane Cole), her parents (Clifford and Gala Evenson), her brother (Maurice “Morrie” Evenson), beloved grandmother (Mary Adams), brothers-in-law (Duard Cole, Kenneth Cole and Reynold Cole), sister-in-Law (Helen Cole) and Nephew (Jerome “Jerry” Cole). Memorial Services will be held at 11am, Saturday, March 2, 2019, at Olson Funeral Home in Menomonie with Pastor Randy Skow-Anderson officiating. There will be a visitation from 10 am to 11 am prior to the service at the funeral home. Burial will be in Tiffany Cemetery in Boyceville, WI at a later date. A Special Thank You to St. Croix Hospice Staff (Jamie, Gina, Lynn, Heather) For Their Sincere Concern and Excellent Care They Provided Our Mother, Maxine. Also Thank You to the staff at the Neighbors of Dunn County-Eastbrook Lodge for their care of our Mother, Maxine for the past 1-1/2 years.

Maxine Joyce Cole, age 84, of Menomonie (formerly of Boyceville), passed away peacefully on February 23, 2019, at The Neighbors of Dunn County in Menomonie. Maxine was born on April 7, 1934 to Clifford and Gala (Adams) Evenson in Menomonie.... View Obituary & Service Information

The family of Maxine J. Cole created this Life Tributes page to make it easy to share your memories.