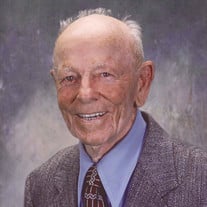 Matthew William Reneson, age 97, of Menomonie, WI, passed away Tuesday, December 2nd, 2014 as a result of a heart attack and is now home with his Heavenly Father. He was born, April 13, 1917, in East Hampton, MA to Stanley and Frances Reneson and grew up in Worcester, MA. Matthew’s father was killed in a train accident when he was two years old leaving his mother to raise four children alone. He worked several jobs to help his mother including picking blueberries, caddying for golfers, and paper routes. In his early career, he worked as a Tool & Die Maker. Matthew served as a Lieut. JG., S (E-2) in the United States Navy from July 8, 1943 to October 16, 1946. He was active duty during WWII on a destroyer in the Pacific Theater. He also was a certified deep sea diver and welder on the ships. Matthew met his future bride, Lillian, at the naval hospital in Seattle, WA where Lillian worked as a Registered Nurse. They were married in Los Angeles, CA and then moved to Fitchburg, MA where he attended Fitchburg Teachers College. Upon graduation, he moved to Menomonie, WI and accepted a teaching position at the University of Wisconsin-Stout where he taught for 33 years in the Math and Physics Department. He completed his Master’s Degree in Education at the University of MN during this time. Dad’s hobbies included; working on his hobby farm, raising beef, gardening, tending his apple orchard, and was an avid golfer. He also enjoyed his fishing trips to Northern WI and Canada. He was active in several community organizations such as, President of the Menomonie Kiwanis Club where he played a key role in the restoration of the Caddy Woodlawn Wayside Park. He also was involved with the Boy Scouts of America as a Scout Master and supporter of their Summer Camp Program. Matthew is survived by his five children, Paul Reneson of McAllen, TX, Jane (Sid) Brannan of Whitesboro, TX, Ruth Reneson of Menomonie, WI, Ralph Reneson of Rochester, MN and David (DeEtte) Reneson of Menifee, CA. He is also survived by grandchildren and great grandchildren; Terry (Pam) Brannan-Noelle, Conall, Ronan; Jeff (Alisha) Brannan-Macy, Barrett, Ella, Addison; Brian (Sarah) Brannan-Luke, Brianna; Stephanie Reneson; Stacey (Jacob) Heisterkamp-Logan; Craig Reneson; Joshua Reneson; Jacob Reneson; Kaitlyn Reneson. He was preceded in death by his wife, Lillian, 1997; his parents, Stanley and Frances Reneson; his brothers, Eugene and Stanley; and one sister Sophia. Visitation will be held at Olson Funeral Home, Friday, December 5th from 5 to 7 pm. Funeral services will be held at Immanuel Baptist Church, Saturday, December 6th at 11 am. Family and friends are welcome at the church one hour prior to the service on Saturday. Memorials may be given to Immanuel Baptist. We look forward to reuniting with you as believers in Heaven. .

Matthew William Reneson, age 97, of Menomonie, WI, passed away Tuesday, December 2nd, 2014 as a result of a heart attack and is now home with his Heavenly Father. He was born, April 13, 1917, in East Hampton, MA to Stanley and Frances Reneson... View Obituary & Service Information

The family of Matthew William Reneson created this Life Tributes page to make it easy to share your memories.