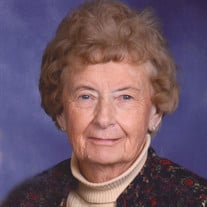 Mary L. Trainor, 88, of Menomonie, WI passed away Thursday, September 1, 2016 peacefully at home. She was born July 15, 1928 in Menomonie, WI to Lillian and Leonard Quilling. She grew up on the family farm on the east side of Menomonie. She graduated from Menomonie High School in 1945. She then worked at Berg's Chevrolet in Menomonie for many years prior to having her family. Mary married Robert Trainor on July 10th, 1954 at Iron Creek Methodist Church. Together they resided and farmed west of Menomonie for over sixty two years. They had seven children together and enjoyed spending time traveling and time with their loving children and grandchildren. Mary was a passionate homemaker, an active community volunteer, master gardener, and most of all a loving & caring wife, mother, and grandmother. She was also a member and volunteer of the Menomonie United Methodist Church. Mary is survived by her children, Pam Ulness of Coon Rapids, MN, Bev Trainor of Orlando, FL, Tim (Catherine) Trainor of Seattle, WA, Lisa (Tom) Reiter of Seattle, WA, Ann (Dave) Braaten of Mequon, WI and Chad (Becky) Trainor of Menomonie, WI; twenty-one grandchildren, Connor, Brent and Allie Ulness, Austin and Taylor Trainor-Kulik, Monica, Mitchell, Marla Mann, Amanda and Katie Trainor, Shelby and Sarah Reiter, Hayden, Hanna and Drew Braaten and Shanda, Brad, Kyle, Kasey, Ben and Alexis Trainor. She is also survived by sisters, Margie Quilling, Betty (Maynard) Moe, and brother Marshall Quilling. She is further survived by brother-in-law George Churchill and sister-in-law Joanne Quilling and by several nieces and nephews. She was recently preceded in death by her loving husband, Robert Trainor, her daughter, Peggy Trainor; parents, Lillian and Leonard Quilling, brothers and sisters, Alvin (Marie) Quilling, Ruth Mueller, Marlys Churchill, Richard Quilling and sister-in-law Josephine Quilling. Funeral Services will be held at 11:00 a.m. Wednesday, September 7, 2016 at the United Methodist Church in Menomonie, WI with Pastor Wendy Slaback officiating. There will be visitation from 4:00 to 7:00 p.m. Tuesday at Olson Funeral Home in Menomonie and at the church one hour prior to the service on Wednesday. Burial will be in Lower Weston Cemetery in the Town of Weston, Dunn Co., WI.

Mary L. Trainor, 88, of Menomonie, WI passed away Thursday, September 1, 2016 peacefully at home. She was born July 15, 1928 in Menomonie, WI to Lillian and Leonard Quilling. She grew up on the family farm on the east side of Menomonie.... View Obituary & Service Information

The family of Mary Lou Trainor created this Life Tributes page to make it easy to share your memories.