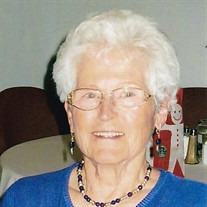 Mary Ann Thedinga left Menomonie almost 30 years ago, but still considered Menomonie her home. She told family members last year, with deep regret, that she didn’t think she would make it back to Menomonie again. She died in Green Valley, Arizona, on February 14, 2017, at LaPosada’s LaJoya assisted living facility, at the age of 91. Mary Ann was born and grew up in Menomonie, the oldest of the three children of Carl and Thelma Peterson. She attended East School, where she was a member of the “Spinach Gang”, a group of students who became life-long friends. She graduated from Menomonie High School and then earned her BS Degree in microbiology at UW-Madison. While on a blind date when she was at UW-Madison, Mary Ann met the love of her life, Howard Thedinga. During their freshman year, Howard joined the Army Air Force and was stationed in England. It would be a long wait for his return. Mary Ann’s heart sank when she learned that Howard’s B17 had been shot down over Germany and he was missing in action. During his 10 months in a POW camp, Mary Ann’s letters to Howard were often returned, undelivered. When a Valentine's Day letter with a hand-drawn heart was returned to her, she wondered if Howard would ever be back. But when WWII ended they were re-united. Mary Ann and Howard were married at Our Savior’s Lutheran Church in Menomonie. After a quick honeymoon, they returned to Madison and Howard finished law school. After Howard graduated, Mary Ann and Howard moved to Menomonie, where they raised six children, Howard practiced law, and Mary Ann did bookkeeping and tax work at Thedinga Law Firm. After retiring, Mary Ann and Howard moved to Green Valley, Arizona, where Mary Ann lived for almost 30 years. She enjoyed the warm climate and liked to introduce family and friends to the beauty and culture of the Southwest. Mary Ann also enjoyed working at a local clothing store, Nancy Pantz. And she enjoyed knitting and playing Bridge. Later in life, Mary Ann surprised herself by becoming a talented watercolor painter. Mary Ann is survived by her six children, Bill (Gail), Mary (Dennis) Curran, John (Barb Mason), Ann (Bill) Kohl, Ruth Thedinga, and Helen Schneider. She is also survived by 10 grandchildren and 8 great-grandchildren, and by her sister, Loie Wollum. Mary Ann was predeceased by her husband, Howard; her parents, Carl E. and Thelma Peterson; and by her brother, Carl L. Peterson. Mary Ann will be buried in Menomonie, at Peace Lutheran Church Cemetery, next to Howard. At Mary Ann’s request, there will be no services. Memorials should go to Mabel Tainter Center for the Arts or the Menomonie Public Library.

Mary Ann Thedinga left Menomonie almost 30 years ago, but still considered Menomonie her home. She told family members last year, with deep regret, that she didn&#8217;t think she would make it back to Menomonie again. She died in Green Valley,... View Obituary & Service Information

The family of Mary Ann Thedinga created this Life Tributes page to make it easy to share your memories.