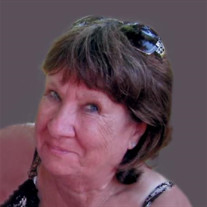 Mary Lou Stratton (O’Connell), 73, passed away suddenly on Sunday, April 29, 2018 in Menomonie, WI. She will be missed very, very much by her kids, grandkids, great-grandkids, family and friends. She was born November 27, 1944 in Red Wing, MN. Parents were Francis G. O’Connell and Mazie Marie O’Connell (Keifer). Mary Lou was a stay at home mom while her kids grew up. She later worked for the Best Western Hotel in the housekeeping area for a short time. She enjoyed spending time with her kids and her grandkids (They were her pride and joy). She also enjoyed doing crafts, sewing, going for car rides, and spending time with family, friends, and neighbors. She is survived by two sons, Jeffery Stratton and Richard Stratton, one daughter Michele Knapp (Stratton) and husband Mark Knapp; grandson Chad Stratton, wife Marissa Stratton; and great grandkids. She is further survived by her siblings, Gary O’Connell of Mondovi, Paul (Penny) O’Connell of Clear Lake, Peggy Carlson of Boyceville, Dan (Joan) O’Connell of Boyceville, Dave O’Connell of Menomonie, Donna (Jeff) Pittman of Clear Lake, Elizabeth (Joel) Bengtson of Amery and several nieces and nephews along with other family and friends. Mary Lou was preceded in death by her parents. A Memorial Service will be held at 5:00 p.m. Friday, May 11, 2018 at Olson Funeral Home in Menomonie with Father James Kurzynski officiating. There will be visitation from 1:00 to 5:00 p.m. Friday at the funeral home. Burial will be held at a later date.

Mary Lou Stratton (O&#8217;Connell), 73, passed away suddenly on Sunday, April 29, 2018 in Menomonie, WI. She will be missed very, very much by her kids, grandkids, great-grandkids, family and friends. She was born November 27, 1944 in Red... View Obituary & Service Information

The family of Mary Lou Stratton created this Life Tributes page to make it easy to share your memories.