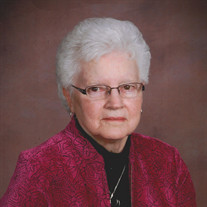 Mary J. Clark Mary Jane Clark, age 85, of Boyceville, WI went to be with her Lord and Savior on April 23, 2018. She was born July 24, 1932 to Benjamin and Lillie (Bushendorf) Vollendorf. She was born in Eau Claire and grew up on the family dairy farm in the Town of Union. She attended Willow Grove Country School and graduated from Elk Mound High School in 1951. After graduating from high school, Mary worked at Kresge’s Department Store in downtown Eau Claire. She married Leo R. Clark of rural Boyceville on September 10, 1953. They owned and operated the family dairy farm in the Town of Sherman, in Dunn County, where they worked side by side and raised their family. Mary loved her family and devoted her life to caring for them. She delighted in her grandchildren and in later years, her great-grandchildren. Most of all, Mary loved the Lord. She was an excellent homemaker and had a very generous heart. Mary liked making people feel special and always had a treat for her grandchildren. She truly made a difference in the lives of her family and those around her. Mary is survived by her four children, all of Boyceville: Donald (Kendra) Clark, Debra (Peter) McHenry, Douglas Clark, and David (Becky) Clark; 10 grandchildren: Stephanie (Abraham) Bensend, Nathan (Nicole) Clark, Kyle (Jenna) Clark, Scott (Sarah) McHenry, Megan (Spencer) Bartz, Ashley McHenry, Catelynn, Kevin, Kenneth, and Christa Clark; 15 great-grandchildren: Hannah, Lydia, Gracelynn, Maria, and Noah Bensend, Jordan, Jessica and Jonathan Clark, Chase, Isabella and Lincoln Clark, Miles and William McHenry, and Sydney and Khloe Bartz. She is further survived by two brothers, LaVerne (Ramona) and Paul Vollendorf of Eau Claire; one sister, Ruth (Irving “Bill”) Nelson of Eau Claire; and one sister-in-law, Katy (Harold) Rubusch of Boyceville. She is also survived by many nieces, nephews, and many dear friends. She was preceded in death by her husband Leo in 2003, and three brothers; John (Lucille), Robert (Ardys), and Charles (Marjorie) Vollendorf. Funeral services will be held at 11:00 AM on Saturday, April 28, 2018 at the Menomonie Alliance Church with Rev. Steven Crites officiating. Burial will be in Sherman Cemetery in the Town of Sherman, Dunn County, WI. Friends and family may call from 5:00 to 8:00 PM Friday, April 27th at Olson Funeral Home in Menomonie and at the church one hour prior to the service on Saturday.

Mary J. Clark Mary Jane Clark, age 85, of Boyceville, WI went to be with her Lord and Savior on April 23, 2018. She was born July 24, 1932 to Benjamin and Lillie (Bushendorf) Vollendorf. She was born in Eau Claire and grew up on the family... View Obituary & Service Information

The family of Mary J. Clark created this Life Tributes page to make it easy to share your memories.