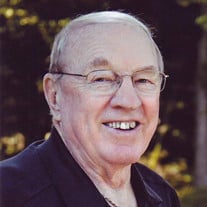 Marvin A. Hillman, age 81, of Menomonie, WI passed away Thursday, March 19, 2015 at the American Lutheran Home, Menomonie. He was born August 6, 1933 in Menomonie to John and Martha (Eighmy) Hillman. He grew up in the area and attended Menomonie High School where he excelled in basketball and football and helped his team to championships. He graduated from High School in 1952 and, after serving in the U.S. Army from 1956 – 1958 (stationed in Germany), he enrolled at UW Stout. He continued playing basketball for Stout for three years and was named ‘MVP’ his junior year. He graduated from Stout in 1963 with a Bachelor’s Degree in Industrial Arts. Marv was married to Judith Nietge from 1961 to 1972. He worked as a regional service manager for Allis Chalmers until he and Judi purchased the “Rustic Stag”, a bar & restaurant in Clam Lake, WI. They had one son, Brian. Marv resettled in Menomonie in 1972 and was the Dunn County Highway Commissioner from 1972 to 1975. He married Jackie Gibson Styer in 1974 and adopted her daughter, Sue. Marv, Jackie and their children enjoyed traveling, snowmobiling, golfing, skiing and boating as a family. One of Marv’s big loves was deer hunting with his son, Brian, and friends and relatives each fall. In 1976, Marv joined the Lawson Products firm and quickly moved from sales agent to District Manager to Regional Manager, winning many top awards for sales and service. He loved his 25 years with Lawson and it was difficult for him to retire. Marv and Jackie lived in the Menomonie area until 2003 when they retired to Garden Lake in Cable, WI. Marv is survived by his wife of 41 years, Jackie; one son, Brian (Michelle) Hillman of Houlton; one daughter, Sue (John) Parker of Menasha; and six grandchildren, Paige and Brandon Hillman, and Tom, Cade, Will and Chase Parker. He is also survived by his brother, Gerald Hillman; his sister-in-law, Joan (Stan) Labs; his brother-in-law, Craig (Marie) Gibson and several nephews, nieces and other relatives and friends. He was preceded in death by his parents, John and Martha; his father-in-law and mother-in-law, John and Doris Gibson; two brothers, Lionel and Donald; one sister, Leola; six sisters-in-law, Diane, Sarah, Pauline, Peg, Vivian Hillman and Winnie Gibson; one brother-in-law, Cliff Wagner; and three nephews, Jim Hillman, Everett Wilbur and Jon Labs. A Memorial Service will be held at 11:00 a.m. Friday, March 27, 2015 at the United Methodist Church, 2703 Bongey Dr., Menomonie, WI with Pastor Wendy Slaback officiating. Military Honors will be conducted by Menomonie Veterans Honor Guard. Family and friends are welcome at the church one hour prior to the service on Friday. Olson Funeral Home of Menomonie is serving the family. Memorials contributions may be made to American Lutheran Home and Mayo Clinic Health System.

Marvin A. Hillman, age 81, of Menomonie, WI passed away Thursday, March 19, 2015 at the American Lutheran Home, Menomonie. He was born August 6, 1933 in Menomonie to John and Martha (Eighmy) Hillman. He grew up in the area and attended Menomonie... View Obituary & Service Information

The family of Marvin A. Hillman created this Life Tributes page to make it easy to share your memories.

Marvin A. Hillman, age 81, of Menomonie, WI passed away Thursday,...