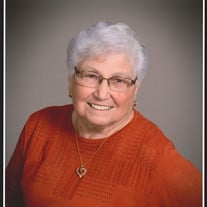 Marlys Joann Andrews, age 82 of Boyceville, WI died Tuesday, December 18 at her home with her husband at her side. She was born April 28, 1936 in Menomonie, WI to the late Harvey and Dorothy (Sipple) Bilse. She was baptized in June 1936 and confirmed in June 1949. She was married to William Benitz and later divorced. On November 27, 1976, she was married to Allen Andrews at St. Paul’s Lutheran Church in the township of Prairie Farm, WI. They have shared love and joy the past 42 years. Marlys spent many years farming while also working outside the home. She worked for Kelly May Insurance Agency, Andale Insurance Agency and later worked as an Insurance Agent for Olson’s Insurance Agency where she retired in 1994. Above all her most beloved job was being a wife, mom, grandmother, and great-grandmother. Marlys loved camping, playing cards with her card groups, spending time with old classmates, caring for her vegetable garden, which was later replaced with her tulip garden and watching them bloom in the Spring. She enjoyed baking and cooking to feed friends and family when they stopped for a visit, taking trips with Allen and family, crocheting afghans for all her children and grandchildren, attending many events for her grandchildren and great-grandchildren, watching the Green Bay Packers, Milwaukee Brewers, and Wisconsin Badgers, and buying Christmas gifts for the “little ones”. She loved her family and friends and cherished time spent with them. She is preceded in death by her parents; her in-laws Max and Ethel Benitz, Ned and Tinka Andrews; brother-in-law Stanley Andrews; sisters-in-law, Lynn Amundson, Marian Nelson; stepdaughter, Kathy Bryan Marlys is survived by her husband, Allen Andrews; children, Larry (Patty) Benitz, James (Pamela) Benitz, Janelle Spadgenske, Jolene (Steven) Bird; two stepdaughters, Kelly (David) Stark, Kim (Jim) Goss; one stepson, Jeff Andrews. Also 10 grandchildren; 11 step-grandchildren; 9 great-grandchildren; 21 step great-grandchildren; 2 brothers, Donald (Carol) Bilse and Eugene (Joan) Bilse. Funeral Services will be held at 11:00 a.m. Saturday, December 22, 2018 at Trinity Lutheran Church in Boyceville with Pastor Brad Peterson officiating. Visitation will be from 9:00 a.m. until 11:00 a.m. at the church. Burial will take place at a later date at St. Paul’s Lutheran Cemetery in Menomonie.

Marlys Joann Andrews, age 82 of Boyceville, WI died Tuesday, December 18 at her home with her husband at her side. She was born April 28, 1936 in Menomonie, WI to the late Harvey and Dorothy (Sipple) Bilse. She was baptized in June 1936 and... View Obituary & Service Information

The family of Marlys J. Andrews created this Life Tributes page to make it easy to share your memories.