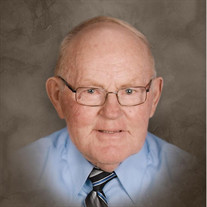 Marlin E. Grambo, age 85, of Menomonie, WI passed away Sunday, October 11, 2020 at his home. He was born April 1, 1935 in Menomonie, WI to Wilfred and Fannie (Price) Grambo. He grew up on the family farm on rusk Prairie. He attended Beyer Settlement School and graduated from Dunn County Aggie High School in 1953. Marlin enlisted in the United States Army after high school. He served with the 6th Armored Division stationed at Schofield Barracks, Hawaii. After his discharge, he served in the United States Army Reserve until 1962. After military service, he returned to the family farm. In 1965, Marlin started working for Tracy’s Seed Corn Company in Avalon, WI. In 1971, he moved back to Menomonie and was manager of Young’s Poultry Farms until he retired for the first time. He then went on to work as a custodian at Kwik Trip until his final retirement. Marlin married Shirley Marquie June 6, 1959 at Holy Ghost Catholic Church in Chippewa Falls. They had four children. Marlin and Shirley enjoyed camping and traveling. His favorite vacation was a trip to Alaska. Marlin was an avid outdoorsman, enjoying all outdoor activities especially deer hunting and musky fishing. Marlin is survived by his wife, Shirley of Menomonie. Children Wes (Cathy) Grambo of Colfax, Sandy Quilling of Menomonie, Jeanette (Kurt) Kucharski of Menomonee Falls, Mark (Brenda) Grambo of Menomonie. He is also survived by grandchildren Danielle (Andy) Dunn of Wallingford, CT, Chelsea (Nathan) Van Roekel of Owatonna, MN, Katelyn (Jack) Quilling-Miller of Austin, MN, Grant (fiancée Sarah Saenz) Quilling of Madison, Dana Kucharski of Milwaukee, WI and Kristofer Kucharski of Denver, CO. Christian Madsen of Minneapolis, Minnesota and Melissa Thompson of Eau Claire, Wi. great grandchildren; Evelyn, Christopher, and Audrey Dunn and Madelyn and Peyton Van Roekel. He is also survived by many nieces, nephews and other relatives and friends and a special nephew Dale Hulback of Menomonie. He was preceded in death by his parents, Wilfred and Fannie; brothers Wesley and Eldon, sister Luann Hulback, and son in law Bruce Quilling. Marlin’s family would like to thank Dr. Adam Miller and care team at Mayo Clinic Health System, Menomonie for their wonderful care and Mayo Hospice for guiding him through his final days. Visitation will be held Wednesday, October 14th from 4:00 p.m. to 7:00 p.m. at Olson Funeral Home in Menomonie. A private family graveside service will be held at 10:00 a.m. on Thursday at St. Katherines Church with military honors by the Menomonie Veterans Honor Guard and will be posted to Olson Funeral Home’s Facebook page after the service. In lieu of flowers, the family is requesting donations be made in memory of Marlin to St. Katherines Church.

Marlin E. Grambo, age 85, of Menomonie, WI passed away Sunday, October 11, 2020 at his home. He was born April 1, 1935 in Menomonie, WI to Wilfred and Fannie (Price) Grambo. He grew up on the family farm on rusk Prairie. He attended Beyer... View Obituary & Service Information

The family of Marlin E. Grambo created this Life Tributes page to make it easy to share your memories.