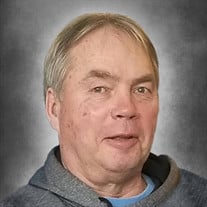 Mark W. Thomas, age 65, of Menomonie, WI passed away on Monday, May 16, 2022, at Woodland Hills Specialty Care in Hudson, WI surrounded by his family following a lengthy battle with Parkinson’s Disease. Mark was born on August 15, 1956, in Northfield, MN to LeRoy and Mary Lou (Talley) Thomas. He was the oldest of nine children. He graduated from Lakeville High School in 1974 where he played football and wrestled. He attended the University of Wisconsin-Stout graduating in 1978 with a B.S. in Technical Education. Mark married Joan (Lammi) on June 3, 1978 and accepted a position with Allis Chalmers leading to territory assignment in Northwestern Wisconsin allowing them to remain and raise their family in Menomonie. Anyone who knew Mark, knows his two greatest loves in life were family and farming. Growing up on the family farm, Mark continued his passion for farming in his career and as his hobby. Mark had a successful and enjoyable career in agriculture equipment sales working for Allis-Chalmers for 9.5 years and Gehl/Mustang for 21.5 years. He particularly enjoyed his close friendships with colleagues Tom, Ken and Jack. After he left Gehl Co. due to health reasons, Mark spent the fall and spring helping on Tom’s farm in Ellsworth, WI. Mark was a proud, loving, and supportive father to his sons, Ryan and Chad. He was their biggest fan and thoroughly enjoyed all their sports and life activities. He shared his same kind spirit and love as Papa to his six grandchildren leaving them with many memories together at the family cabin in Barnes, WI. Mark is survived by his wife, Joan; son Ryan and his wife Maureen and their children, Liam, Connor, Gavin and Ronan; son Chad and his children Parker and Quinn. He is also survived by his mother, Mary Lou Thomas; siblings Nick (Sue), LeAnn (Dan), Marion (Keith), Marjory, Margaret (Kevin), Monica (Mark), Martin, and Jack; his brother and sister-in-law, David and Lynn Lammi, as well as numerous nieces, nephews, other relatives and friends. He was preceded in death by his father, LeRoy Thomas. A Celebration of Life will be held on Wednesday, June 22nd at Kyote’s Den Bar and Grill in Menomonie, WI from 4:00-7:00 p.m. This was the location of his morning coffee gatherings. A special thank you to the staff at Woodland Hills Assisted Living and Specialty Care and St. Croix Hospice for their compassionate care and support for Mark and his family. The family suggests memorials to Stepping Stones of Dunn County, Park Nicollet Struthers Parkinson’s Center in Golden Valley, MN or a charity of choice. Olson Funeral Home in Menomonie, WI is serving the family.

Mark W. Thomas, age 65, of Menomonie, WI passed away on Monday, May 16, 2022, at Woodland Hills Specialty Care in Hudson, WI surrounded by his family following a lengthy battle with Parkinson&#8217;s Disease. Mark was born on August 15, 1956,... View Obituary & Service Information

The family of Mark W. Thomas created this Life Tributes page to make it easy to share your memories.