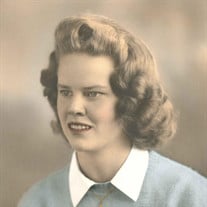 Marion Elaine Wyss was born on April 29, 1926 in her parent’s home in Lucas Township. She passed peacefully on Monday, February 6th 2017 at the Spring Valley Health Care Center. Growing up, Marion enjoyed helping her dad with chores, playing with marbles, and playing softball. She boasted how she was often the first player chosen when picking teams. She completed her homework by candlelight and was without a radio or television while living on the farm. When she was thirteen, she moved off the farm and to Menomonie. She helped her dad with janitorial duties at Our Saviors Church. In high school, she worked at the meat counter at Red Owl. After high school, she attended a semester at Stout. She also worked as a telephone operator and at Presto in Eau Claire where she made outer parts of bombs during World War II. At this time, she lived with her parents in a house in North Menomonie where Walgreens is located today. It was while on a blind date she met Carl Wyss. She said that judging by their first date, she knew she would marry him. She got her diamond in December of 1946 near the fence of a cow barn at the Dunn Country Fairgrounds. They married at Our Saviors Lutheran Church in Menomonie on May 10, 1947. Together, Carl and Marion were sports enthusiasts. They rooted for the Packers, Badgers, Twins, Brewers, and in the late years for the Spring Valley Cardinals. Carl and Marion farmed together in the town of Lucas from 1947 until 1982, when they moved into the city of Menomonie. They were happily married for over 59 years. Marion is survived by a son, Larry Wyss of Chippewa Falls; a daughter, Peggy Timm of Wilson; six grandchildren; Amy (Todd) Schwartz of Menomonie, Tammy (Troy) Waller of Boyceville, Wendy (Dean) Lipke of Knapp, Jamey Wyss of Menomonie, Mandy (Dan) Stasiek of Wilson, and Troy Timm of Katy, Texas, six great-grandchildren; Brittany Waller, Daniel Schwartz, Braden and Conner Lipke, Melody Wolbert, Coy and Cade Stasiek. One sister-in-law, Betty Mattison, Many nieces and nephews and other relatives. She was preceded in death by her husband Carl Wyss, parents Phillip and Ragna Mattison, three brothers Irvin, Clifford, and Lyle Mattison, son-in-law Mark Timm, daughter in-law Lynda Wyss, and great-grandson Cam Stasiek. Memorial Services will be held at 11:00 a.m. Friday, February 10, 2017 at Our Savior’s Lutheran Church in Menomonie with Pastor Heather Wigdahl officiating. There will be a visitation on Thursday from 4:00 p.m. to 7:00 p.m. at Olson Funeral Home in Menomonie and also one hour prior to the service on Friday at the church. Burial will take place in the spring at Christ Lutheran Halvorson Cemetery in Menomonie. Her family wishes to express their deep gratitude to all their supportive friends and to the kind and attentive staff at Valley Villas and the Spring Valley Health Care Center in Spring Valley, Wisconsin.

The family of Marion E. Wyss created this Life Tributes page to make it easy to share your memories.